My recent trip to Syracuse gave me lots of material for posts but as I have written before about this Sicilian city I thought that this time I would hone in on the Archaeological Park of Neapolis which holds Syracuse’s most important Greek and Roman remains.  The Park covers approximately 240 square metres and the Greek and Roman periods are divided by a green, tranquil oasis in the midst of the ruins, called Viale Paradiso.

The Park came into being between 1952 and 1955 with the idea of bringing together all the monuments, pillars and stones which previously had been located on various private properties and were not accessible to the public.  The result has been an outstanding success.

The Roman part dates back to the 3rd century AD and the Amphitheatre (seen below) is the largest in Sicily at 140 x 190 metres, and it is recorded that the first performance of Aeschylus’ Etnean Women was performed here in 476 BC.  To avoid this turning into a history lesson, I shall leave the images, with captions, to speak for themselves.

Not only was the amphitheatre used for drama: political life was played out here too, especially the assemblies in which all citizens participated.

The Greek Theatre has more to offer in the way of remains (but excavations are still ongoing on the Roman side), possibly because it is mostly carved from the rock and is in a certain sense permanent and incapable of being seriously damaged.  There are 8 stairways to the top of the theatre with various walkways running along the seats.  At the top is a rectangular terrace sculpted from the rock dating back to when it was first built.

Caves and niches in the walls of the terrace would suggest offerings to honour the Gods or the Heroes, the above Cave of the Nymphaeum being one of them.  This 6-metre deep cave takes its name from the large basin covered with a vaulted ceiling in which a small waterfall tumbles originating from a branch of the ancient Greek aqueduct.  Statues discovered of the Muses dating from the 2nd-century BC are now on display in the Regional Archeological Museum. 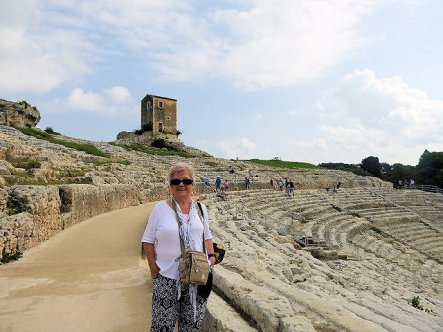 Mari, ready to take on Greeks and Romans 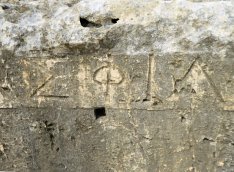 How old, one wonders, is this lettering?

Detail of the seating

On the top edge on the right you can just see the top of the most modern church in Syracuse, Our Lady of the Tears.

Looking towards the stage

The Ear of Dionysius

Possibly the most interesting and popular sites in the Park.  While this looks like a natural cave it is really the result of tons of material having been extracted from the quarry of which it was a part, over many centuries.  The large cave known as the Ear of Dionysius is 65 metres long and 501 metres wide, narrowing towards the top.  The name was given to it by the painter Caravaggio who visited in the 17th century (and whose painting of St. Lucia hangs in the small church by the Duomo) and who thought its shape resembled that of a human ear.  Popular tradition has it that the cave had been used by a local tyrant to imprison his enemies whose whispers he could hear from the small opening at the top.  I like this version.  Myths are always more fascinating than facts. 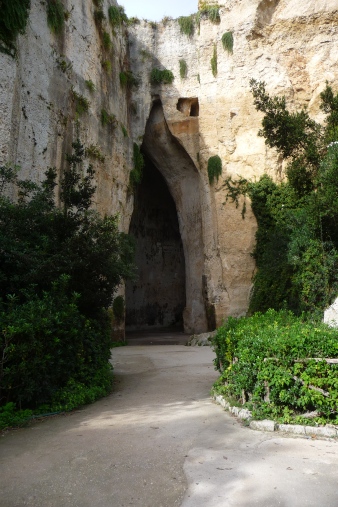