Looking through some images last night reminded me of a trip I took a few years ago visiting the places where the Impressionists had painted (sometimes standing exactly where they had stood as they worked), places like Rouen, Honfleur, Etretat and Le Havre in N. France.  The idea behind the trip was to look at the reality of what the artists had painted and then to make a connection with the painting by viewing it in a nearby gallery.

Where and what they painted at the time was a complete change in the art world, helped by pre-mixed paints in tubes and new vibrant hues like chromium yellow and French ultramarine that freed them from the chore of grinding up lapus lazuli and mixing dry pigment in linseed oil to make colour.  With these aids, their style of painting could now evolve and they were able to paint ordinary subject matter outdoors, capturing the momentary, transient aspects of light and the ever-changing colours of the clouds.

Claude Monet painted more than thirty versions of Notre-Dame Cathedral in Rouen, a church which is a mishmash of architectural styles spanning four centuries, but which is mesmerizing in its scale and grandeur.    As we stood facing the church from the opposite side of the square from where Monet had painted the church, rain was pouring down its exterior walls.  But Monet had painted many rain-washed scenes of the Cathedral so that was good.

The Musée des Beaux-Art in Rouen has a particularly fine collection of Impressionist paintings and when I came face to face with Monet’s misty, murky impression of the rainswept sumptuous west face of this massive Gothic structure, I was nearer understanding why so many were painted in the rain. 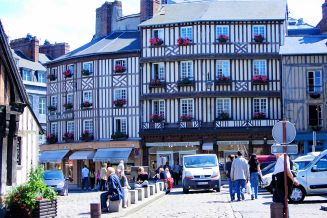 Rouen is a maze of cobbled streets lined with beautifully preserved or restored half-timbered houses that lean crookedly together: more than 100 of these houses date back to the Middle Ages.  Many of these streets lead from the Cathedral to the famous Rue du Gros Horloge with its lavish Renaissance clock centred in an elegantly carved arch, and then to the city’s hub, the Place du Vieux Marché ringed by cafés and restaurants housed in 16th – 18th century buildings, and famous as the place where Joan of Arc was burned at the stake in 1431.  An iron cross set in a simple little memorial garden marks the spot and a daringly designed slate-covered church dedicated to the saint stands next to it.

Not far from Rouen is atmospheric little Honfleur, a town unlike any other in Normandy where the 10-storey high timber and slate-faced buildings that surround its 17th century Vieux Bassin has made it one of the most photographed towns on the Seine.   Bright trawlers jostle together in the old harbour to sell succulent seafood on the quayside, seafood which is later served up by the many waterside restaurants.

It is here that Eugène Boudin and a like-minded group of friends from Paris formed the Impressionist movement.  Attracted by the beauty of the town and the quality of its light they used to gather at the nearby Côte de Grace Hill above the town, and paint the scene before them, edging towards something experimental and new, using short, broken brushstrokes of untinted and unmixed colour, painting wet paint on to wet paint instead of waiting for one layer to dry, which led to intermingling of the colours.   Later, they would drink and dine in a simple 17th-century farm dwelling, Ferme St. Siméon, now a luxurious and very expensive hotel.

The delightful and intimate little art gallery, Musée Eugène Boudin, founded in 1868 by Honfleur’s best known artist, considered by many to be the father of Impressionism, has one of the best collections of Boudin’s own works – including the wonderful Port de Dieppe – as well as a vast collection of paintings by artists like Jongkind, Isabey, Monet, Dubourg, Mettling, Pissarro, Renoir and Dufy who came to be known as “the Honfleur school”.

Honfleur was also the birthplace in 1886 of the musician Erik Satie and it is worth spending an extra hour or two in the Maisons Satie where you are led from one room to another to the accompaniment of Satie’s music backed by a series of stunning Satie-esque visual effects – like the white piano in an all-white room that clanks and jangles maniacally.

A surfeit of art and too many Museums can lead to an inability to be a discerning art critic, so a trip to La Bouille on the banks of the Seine, a favourite spot for Alfred Sisley to paint, came next.   Packed with art galleries and good restaurants, this charming village is a haven of peace.  To see it from the river, you can board a cruise from Rouen and enjoy the scenery along the way, the many little villages along the curves of the Seine and the village life of France.   Canoes and kayaks swish through the water, a little ferry chugs across the river transporting passengers and cars between Duclair and La Bouille, and Sahurs and La Bouille and if you stand by the landing stage and gaze downstream to the loop in the Seine, you are looking at a scene often painted by Sisley. 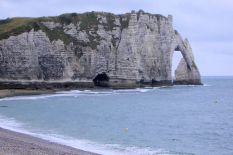 The quality of light that floods Normandy attracted the painters to the coast at Etretat where the spectacular setting between cliffs eroded into arc-like shapes brought Boudin, Monet, Courbet, Isabey, Delacroix, Degas and Matisse here when it was still a fishing village.  They came to paint the natural arches and stone outcrops (one needle rock stands 70 metres high) shaped by the thundering waves:  they came also to paint the beach scene, for Etretat was a fashionable town in the 19th century, popular with Parisians and writers like Flaubert, Gide and Maupassant were regular visitors.

(It is still popular with visitors from Paris and Le Havre).  From every angle on the promenade, you can see the scenes the impressionists worked on, but the best view is found by climbing the steps from the promenade and walking along the path at the top of the cliff.

Etretat may have attracted many visitors from nearby Le Havre, but that port city has its own magnificent steel and glass Musée Malraux right on the waterfront, recently revamped to make use of the optimum light.

Many people pass speedily through Le Havre without realizing that the local Museum houses an unbeatable collection of paintings by the local born Raoul Dufy, full of the dazzling blues and vibrant colours for which he is known.  Eugêne Boudin, the other impressionist who lived here, is represented in the Museum by over 200 canvasses.   Monet was brought up here from the age of five (and taken under Boudin’s wing when he was 15 years old), painted several masterpieces, including the one that some believe gave the name to the group, Impression Soleil Levant (Impression Sunrise) from a position just in front of the museum.  The collection includes the square Giverny waterlily painting and one of his brooding paintings of London’s Houses of Parliament.

I knew little of Impressionism before I went looking at the paintings with a ‘painterly’ eye but now I no longer view thundery skies with the jaundiced eye of the philistine.  If there is a bright yellow sun I know that the Impressionists would depict the shadows as violet, and if the shadows are blue I know that the sky must have had strong orange tints.  Now on my walks, when I see changeable and tumultuous clouds I think of the skies I saw, often stretched across half a canvas, and I think, “That’s a Boudin sky” and I don’t even mind that they herald rain.

Monet hated the tag “Impressionism” but whether he liked it or not, it was this that defined the movement.  Unspoilt Normandy, rich in beguiling light, ever-changing skies and the winding Seine made the perfect studio for the painters. 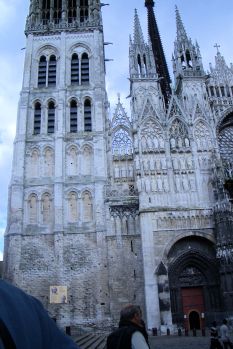 Notes:  I would hate people to think that Rouen’s Musée des Beaux-Art only has a collection of Impressionist paintings.  It also houses a fine collection of work by Renaissance and Flemish painters, plus a magnificent Caravaggio and a whole roomful of Veronese (plus it is rich in paintings of Monet’s vibrant poppies).

If time permits, do eat at one of the glass-screened restaurants in Etretat.

Le Havre had to be massively rebuilt after the city’s obliteration during the second world war, but it still retains some old Breton architecture in the St. Francois quarter.

In response to The Daily Post’s weekly photo challenge: “Serenity.”

This is a different sort of Post – it is one in which I’m responding to the weekly photo challenge set up by WordPress.  This week the topic is Serenity so here are a few images that to me represent that scarce emotion in today’s world, serenity.

The first one, below, may not look like everyone’s idea of Serenity, but this Cretan man had an attitude to life that was calm and benign.  He was one of the happiest people I’d ever met: even his donkey seemed happy in the heat of the midday sun.  It was a harsh life up there in the mountains but Andreas told me he had everything in life he needed, his olive trees, a few animals, a family in good health and all living nearby, and most of all, he said, he lived on Crete.

What more can I say?

Next photograph is very different.  I did an Art Tour once in France where we stopped at various place where some of the painters known as The Impressionists had painted: their pictures were hung in nearby galleries or galleries of some note further away.  Rouen I remember very well, as it was one of the places where it rained incessantly during our visit, but luckily, Claude Monet had painted more than 30 pictures of the famous Notre Dame Cathedral (many in the rain) so we were able to see it just as the artist had seen it.

When the group of painters who came to be referred to as The Impressionists evolved their style of painting from chocolate-box interiors to naturalistic outdoor scenes, they were helped by two mid-19th century inventions.   One was pre-mixed paints in tubes (akin to today’s toothpaste tubes), and the other was the new vibrant hues like chromium yellow and French ultramarine that freed them from the chore of grinding up lapus lazuli and mixing dry pigment in linseed oil to make colour.

What it also gave them was a complete change of perspective.   With these inventions they could now paint “en plein air” (outdoors), capturing the momentary and transient aspects of light and the ever changing colours of the clouds and using ordinary subject matter.

Alfred Sisley (October 30, 1839 – January 29, 1899) was an English Impressionist landscape painter who was born and spent most of his life in France.  A very disciplined painter, Sisley is recognized as perhaps the most consistent of the Impressionists.  He never deviated into figure painting or thought of finding another form in which to express himself.  The Impressionist movement fulfilled his artistic needs.

Below is a photograph I took of a scene he painted (I think his painting hangs in the Gallery at Honfleur).  To me it is serenity itself.  I photographed it on a day when the Normandy sun was shining, dragonflies were chasing each other over the Seine, the village of Bouille was quiet as the people rested after lunch and I captured the scene on camera as I remembered it from the painting.