Montpelier had been experiencing rapid growth since the 1970s.  The city was on line to become the new regional technology centre and there was a need for expansion and for more public housing.  In 1979, the newly elected municipal council of Montpelier, with far-seeing vision, decided to develop a whole new district to provide for this expansion and link the centre to the River Lez.  The plan for the stunning development incorporated a west-east axis consisting of a landscaped boulevard and a series of squares enclosed by residential blocks each of seven-stories, to terminate in a new waterfront “port” along the Lez.

Magnificent Buildings along the 1 Kl-length of Antigone – Mari Nicholson

Thus did Antigone, surely the most attractive of new developments in France, c0me into being.  The 1-Kilometre length of this development was built on the grounds of the former Joffre Barracks, located between the old centre of Montpelier and the River Lez which meanders along the eastern side of the city.  It is known as the Champs-Élysées of Montpelier and the master plan was designed by Spanish architect, Ricardo Bofill – who also designed the majority of the buildings – as a series of grand neo-classical structures with pediments, entablatures and pilasters on a gigantic scale.

The Antigone squares are idealised, perfectly proportioned Renaissance spaces with grand names like La Place du Nombre d’Or.  Neo-classical Greek statuary that harks back to another age is dotted about the boulevards and plazas in streets that were planned to allow a paved walkway from Place des Echelles de la Ville to the River Lez.  A continuous movement of wheeled devices and small battery-powered minibuses provide transportation within the mall. 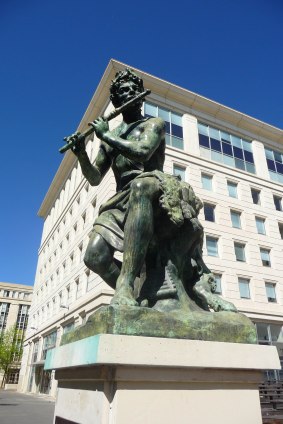 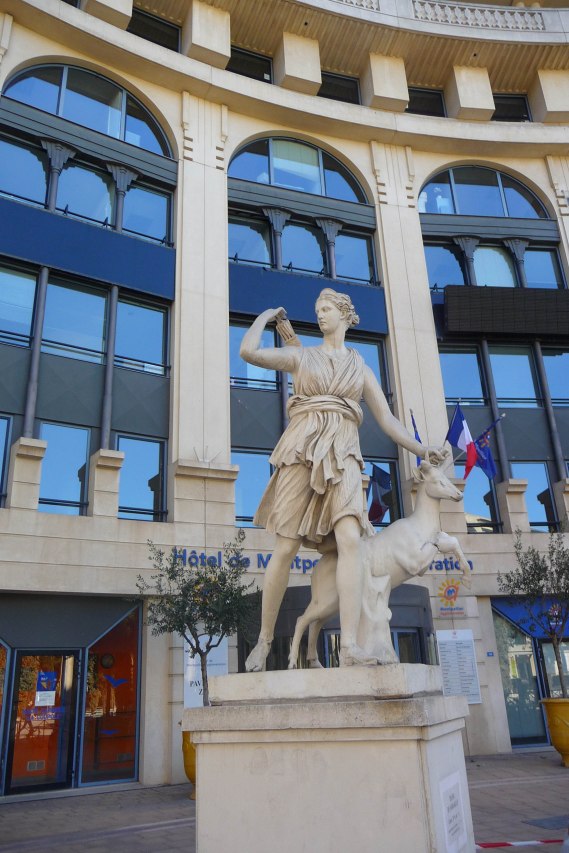 Antigone is an enormous project in every respect.   It includes about 4,000 new dwellings and 20,000 sq. meters of commercial space, the Languedoc-Roussillon regional government headquarters, office space, various government offices, restaurants and cafes, schools with special housing for students and artists, sports facilities, and underground parking.  This new development is town planning n a grand scale.

among the water spouts with Greek statue centre – Mari Nicholson

The only other project of this size and scale designed by one architectural firm is the Karl Mark Hof in Vienna, but this has a mere 1500 dwellings as compared to the 4,000 at Antigone and almost no other services.

A visit to this remarkable area of Montpelier makes it easy to see why it continues to attract worldwide attention.

If there’s a city in France that can offer more in the way of enjoyment, relaxation, places to visit outside the area than Montpelier, then I have yet to find it.

Known as the sunshine capital of France because of its 300 sunny days per year, Montpelier lies just 11 km from the Mediterranean coast and has its own wide sandy beach within an easy tram ride.

Montpelier combines recent history and old-fashioned elegance with a youthful feel, mostly due to its large student population and its university.  It had the first medical school in France at which Nostradamus and Rabelais studied and is a delightful mix of old buildings in the centre, and  major new-age industries in modern buildings around the edge.  Lovely beaches are nearby at Palavas-les-Flots. What more could anyone want?

As easy town to get around, the places listed as ‘must-sees’ are more or less grouped together, the Place de la Comédie, the Peyrou garden, the Charles de Gaulle esplanade,  t the Arc de Triomphe,.and the Saint-Roch church, all on the well-trodden tourist route.   However, like European capital cities such as London, Madrid, or Paris, the city abounds with special neighbourhoods with individual identities, some specialising in artisan work, some in antiquities and others devoted to food and wine.  Their social mix gives them a fascination lacking in other towns in the region. 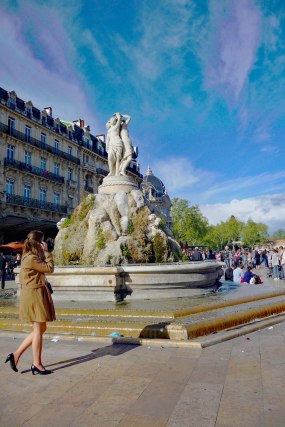 The centre of the action and the beating heart of the pedestrianised centre is the Place de la Comédie.  During the morning there is a market at one side of the Place where the local farmers set up stalls and sell fresh fruit and vegetables: off to one side of this is the flower market, a static garden of jewel-coloured blooms and plants.  During the season an old-fashioned carousel is stationed at the other end of the square near the Opera House (a useful place to arrange to meet someone as is the statue of the Three Graces).  In the middle of the square street artists demonstrate their talents as magicians, living statues, cycle gymnasts, mime artists and break dancers.  Passengers coming from the St. Roch railway station with their wheeled luggage skirt around them as they dodge the colourful trams that glide over the yellow paving while students watch from the nearby cafes, their books open before them. 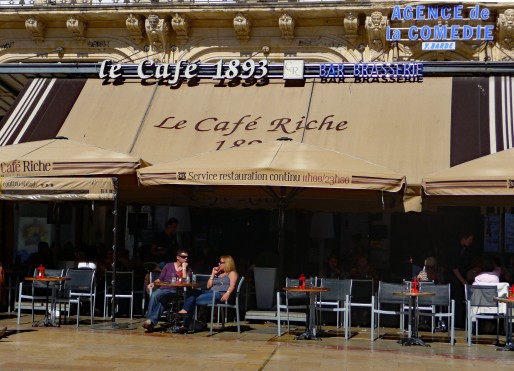 The large student population makes it a lively spot all year round and gives the city a buzz. The cafés, bars, and bistros in the pedestrianised city square which spill out onto the street are one of the attractions of Montpelier and it can be difficult to find a table at certain times.  One of the busiest cafés, the Café Riche, is also the most popular and dominates the square with a grand awning bearing the name and date of its foundation. 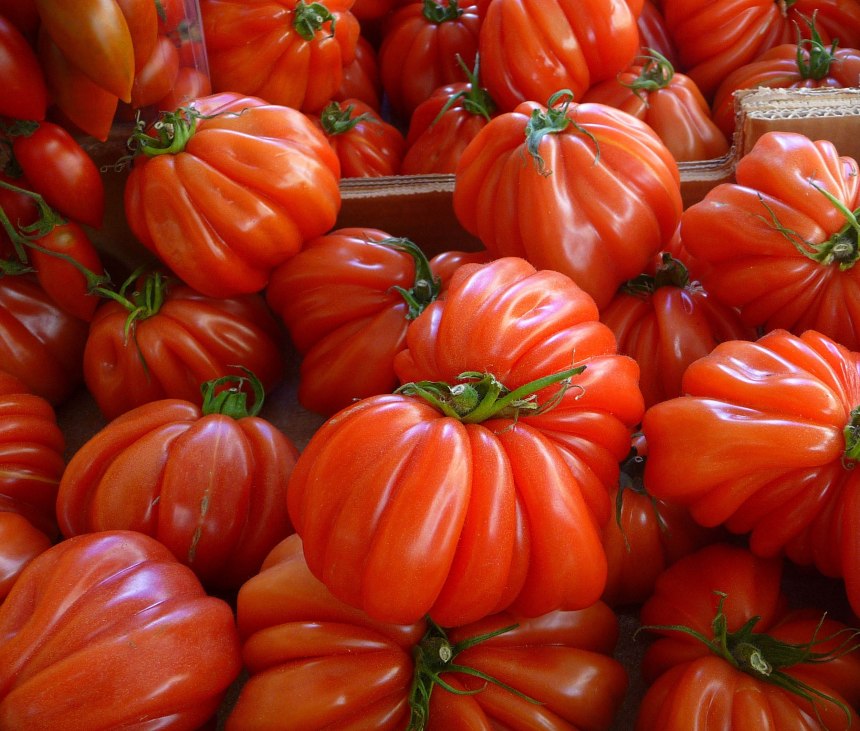 Couer de Bouef Tomatoes – a Speciality of the Region

The Montpelier region is known for its local produce, its excellent wine, its fine dining and its farmers’ markets.  It has 3 Michelin-starred restaurants in addition to other excellent eating places and bistros.  Being right in the heart of the Languedoc, the opportunity to sample the luscious wines of the region as well as those of nearby Roussillon shouldn’t be missed, and tastings at nearby vineyards are easy to arrange.

The old town with its medieval narrow streets is lined with upmarket boutiques and antique shops interspersed with restaurants and typical houses of the area fronted by private courtyards, a  world that sits quite comfortably with cutting-edge design and architecture in other parts of the city.  Check out the mock-Gothic Pavilion Populaire and compare it with the modern, glass-clad town hall.  Even transport gets into the act, with designer trams from the hand of no less than Christian Lacroix!

Wander along Rue Foch, a road carved through medieval Montpellier to the Arc-de-Triomphe, a glorious golden stone arch which could only be in France and which was built to honour Louis XIV.  Just beyond this point, you will come upon the king mounted on a horse on the magnificent Peyrou Promenade. 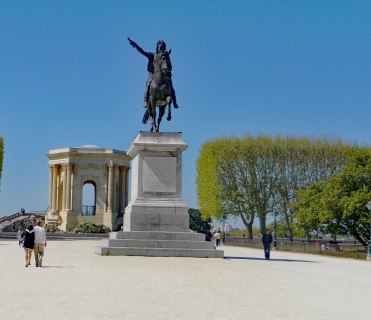 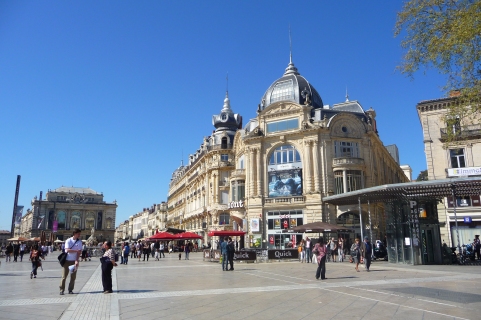 Antigone is Montpelier’s new modern part of the city, is located to the east of the historic centre and is the biggest single development to be built in France.  This extraordinary development which extends the city to the banks of the River Lez, has been designed by Catalan architect Ricardo Bofill and was completed in the 1980’s.

As it’s name implies, the area is based loosely on the architecture of Ancient Greece and a further link is apparent in the boulevards with names like Rue de L’Acropole and Rue de Thebes that open out and lead you into large squares with names redolent of famous Greek events, like Place de Marathon and Place de Sparte.  The neoclassical design of the buildings, the sculptures, and the layout, are dramatically different to the architecture of the old town, and although on a larger than life scale, it is all well proportioned.

At the end of the Antigone district is the Place de Europe, a huge semi-circular area with a crescent of buildings. On the other side is the River Liz adding to the drama of the site and on the opposite bank the ‘Hotel de Region’ also built in the neo-classical style.

The fishing port of Palavas-les-Flots is worth a trip even if it’s only for a bowl of mussels served with chips (French fries to some) or garlic and herb breads in any one of the ways in which they are served here.  The port is making great efforts to turn itself into a seaside resort but despite the attempts of the many boat owners to entice you aboard for a sea trip, a fishing trip or a tour around the lagoons, it remains firmly a place to visit for its great food.  Bars, bistros, and ice-cream parlours line the central canal and you can walk a few miles along the spit of land to the medieval Maguelone cathedral which stands between sea and lagoon. 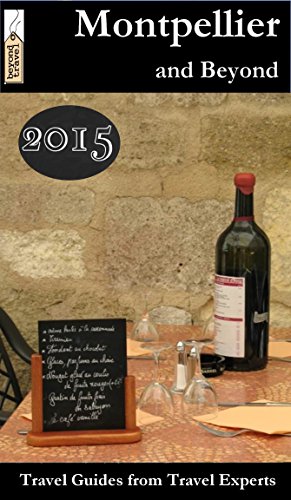 Montpelier and Beyond Travel Guide is a pocket guide to the best of Montpellier, written by two award-winning travel experts Donna Dailey and Mike Gerard and published by the team behind the successful Beyond London Travel.   Available from Amazon as an e-book or a download for Kindle.

Photos and moments in life for a pause

A 60-something guy trying to figure out the world, and his place in it.

An escape to a different life; chronicles in Archaeology

All States Of Being

....are determined by mind

Travelling is my joy of living. Sit back relax and come with me.