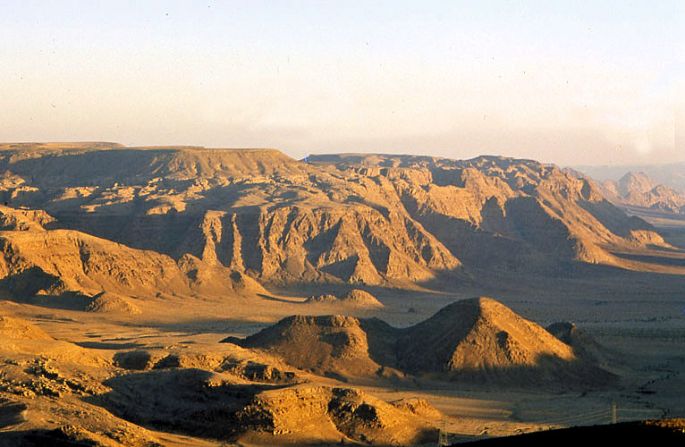 A few hours drive from Amman along the King’s Highway that cuts through the desert and you can be in the stunning nature reserve of Wadi Rum, for me the second unmissable destination in all Jordan.  Familiar to movie-goers from the David Lean film ‘Lawrence of Arabia’, it was one of  the principal encampments during World War I for the attack on the Ottamans by Lawrence and the Arab Army of Sharif Hussein bin Ali, the Hashemite leader of the Great Arab Revolt.

Wadi Rum is a timeless place, virtually untouched by humanity and stunning in its magnificence.  The weather and the winds have carved the imposing, towering towers of rocks that surge out of the earth like skyscrapers, so elegantly described by T.E. Lawrence as “vast, echoing and God-like…”

The totally natural Wadi Rum, described by Lawrence in The Seven Pillars of Wisdom as “landscape that refused to be an accessory ” was a caravan route during Nabatean times, and those who trek or hike through the canyons and the red sandstone hills will come across stones and rocks inscribed with the graffiti of two thousand years ago.  I cannot vouch for the age of the graffiti below: my guide assured me that it was thousands of years old but I’m naturally sceptical when around guides so I’ll pass on that one. 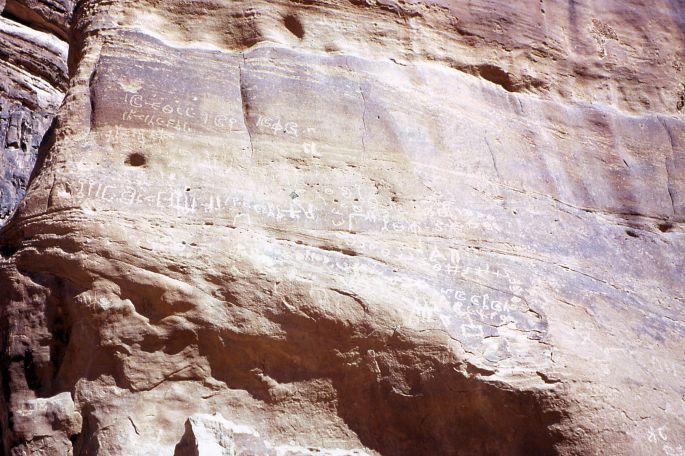 Monolithic rocks surge from the desert floor to heights of 1,750 metres offering a challenge to serious mountaineers.  Less strenuous exercise like trekking or hiking in the empty spaces, offers the enjoyment of  exploring the canyons, the water holes and the 4000-year-old rock drawings in this vast wilderness. 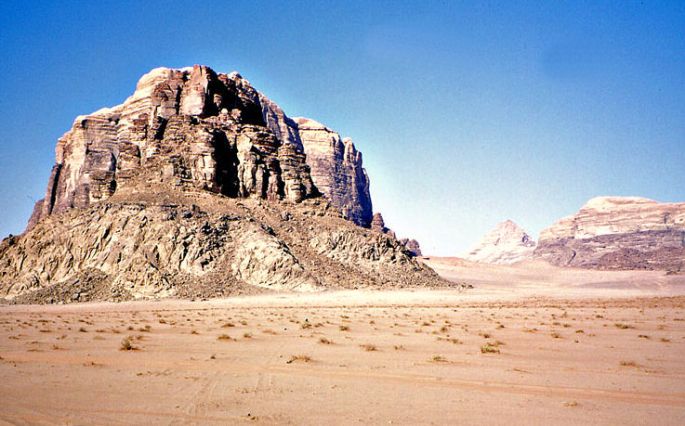 Trekkers should be well-equipped and always carry a map of the area, a compass, plenty of water, sunblock and a hat.  It is easy to get lost in this maze of mountains and desert, so it’s best to take a Bedouin guide if at all possible. 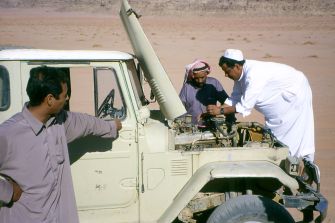 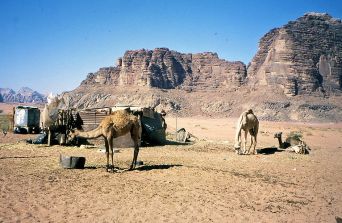 To Jordan’s credit there are no hotels in Wadi Rum, but camping is permitted.  A night spent under the star-studded sky as the sunset deepens the shadows and colours the rocks, to wake at first light to see them change again from brown to reddish-pink, is a life-affirming event you will never forget.

Although there are no cafés in the desert you may come across of the black, low-slung tents made from goat’s hair where Bedu hospitality ensures that you will be offered a refreshing cup of tea and a chance to get up close and personal with the pack animals.

Always dress modestly when visiting a Bedu area, skimpy shorts and tops will be considered disrespectful, and remember to ask permission before taking photographs of the local Bedouin.

There is a Visitor centre where the hire of guides and 4 x 4 jeeps can be made, and where bookings to spend a night in a Bedouin tent sleeping under the stars can be arranged – something everyone should do at least once in a lifetime. 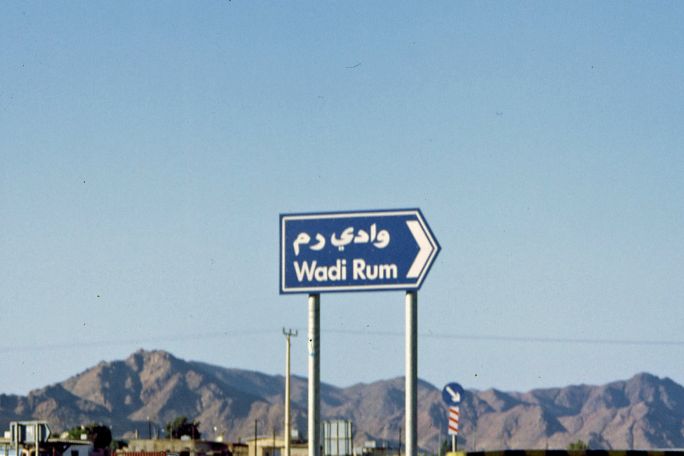 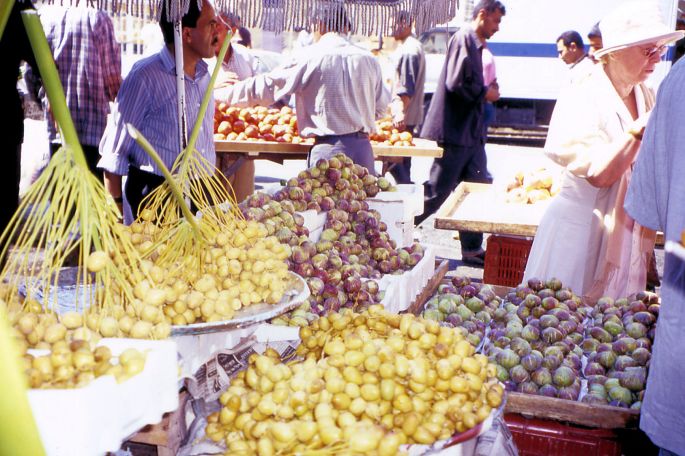 In the rush to Petra, Amman is often overlooked, but this is a pity because a day or two in Jordan’s capital reveals a wealth of historical sites, most of them dotted throughout the city, part of the daily life of the inhabitants.

The city has a well preserved Roman Theatre, a colonnaded street and a Nymphaeum: the juxtaposition of the very ancient and the modern looks perfect.  No painting in garish colours is allowed in Amman so the whole is soothing to the eye. 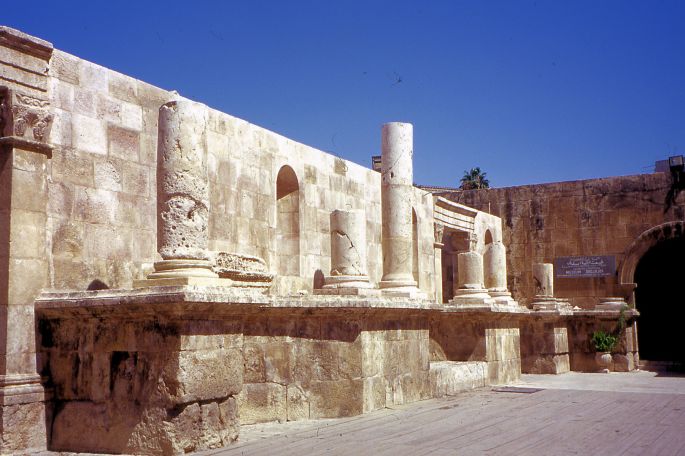 Amman is built on seven hills and you should take a taxi to the most ancient part of the city, Jabal al-Qal’a which translates as ‘Citadel Hill’.  The most famous ruins here are the Roman Temple of Hercules, the Byzantine Church and the Umayyad Palace.  The gigantic sandstone blocks of this Roman Temple, part of a vast complex erected in 1200 BC by the Ammonites who gave Amman its name, are being put back together by a team of international archaeologists.  An extra bonus are the magnificent views across downtown Amman from the hill which is one of the highest points in the city. 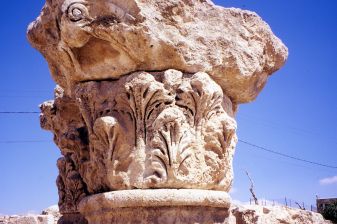 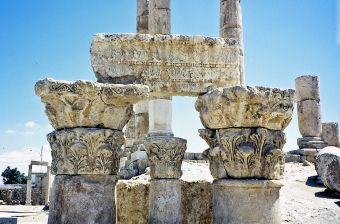 In the nearby Archeological Museum, you’ll find the 3rd century Dead Sea Scrolls, rectangles of kidskin sewn end to end only discovered in 1947 by some Bedouin shepherds.

From a 3000 year old culture to modern nightlife, there’s something for everyone in Amman.  You’ll find that the vendors are busier with their worry beads than with their calculators, and whether you shop in ancient souks or state of the art shopping malls, you will find no pressure on you to buy anything – a delightful change from Cairo. 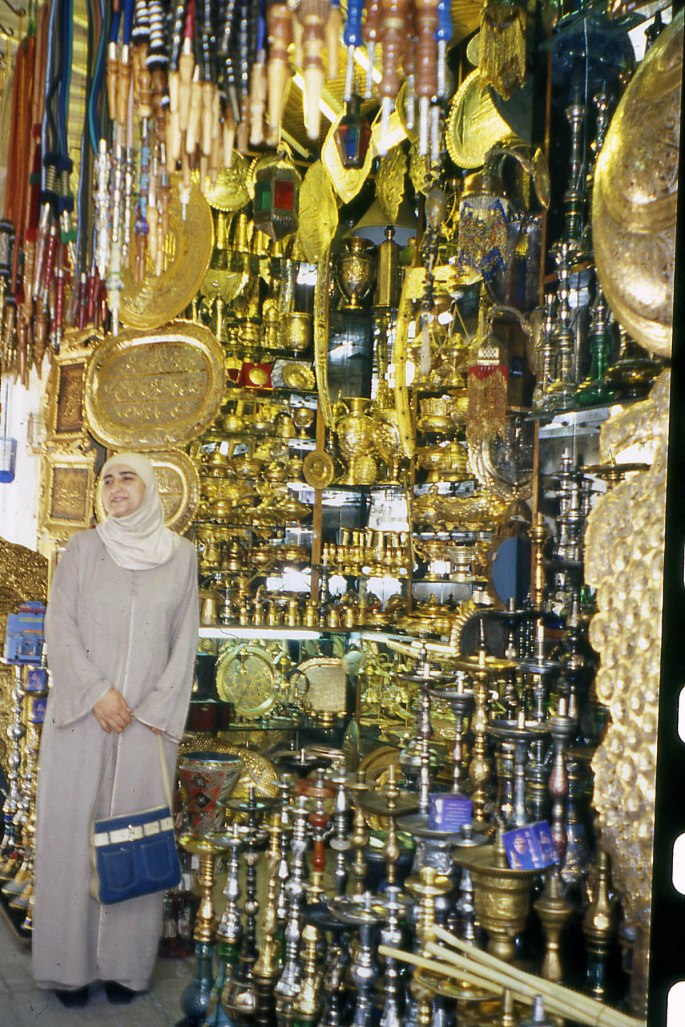 What you will find is a pocket of traditional Arab hospitality and a people who want to extend the hand of friendship, for Jordan is a peace-loving nation and welcomes all visitors.   Amman seems to be more of a collection of adjoining villages rather than one entity with downtown having a constant rumble of traffic, markets, and bustling people. Its highlight is the Roman Theatre where the seats are chiselled out of the mountain.

And as for food, I can only say “Go try for yourself”.  I never had a bad meal in two weeks in Jordan and I tried many different restaurants. 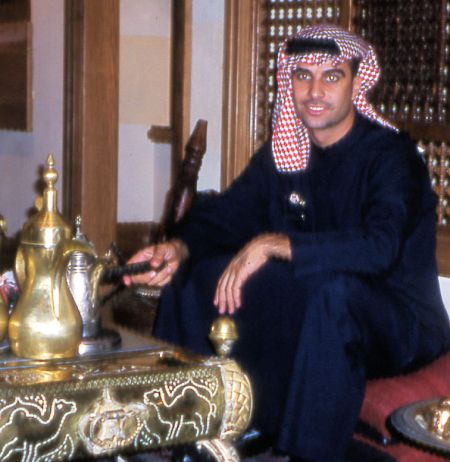 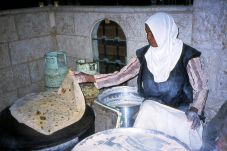 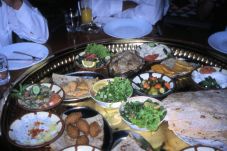 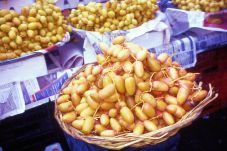 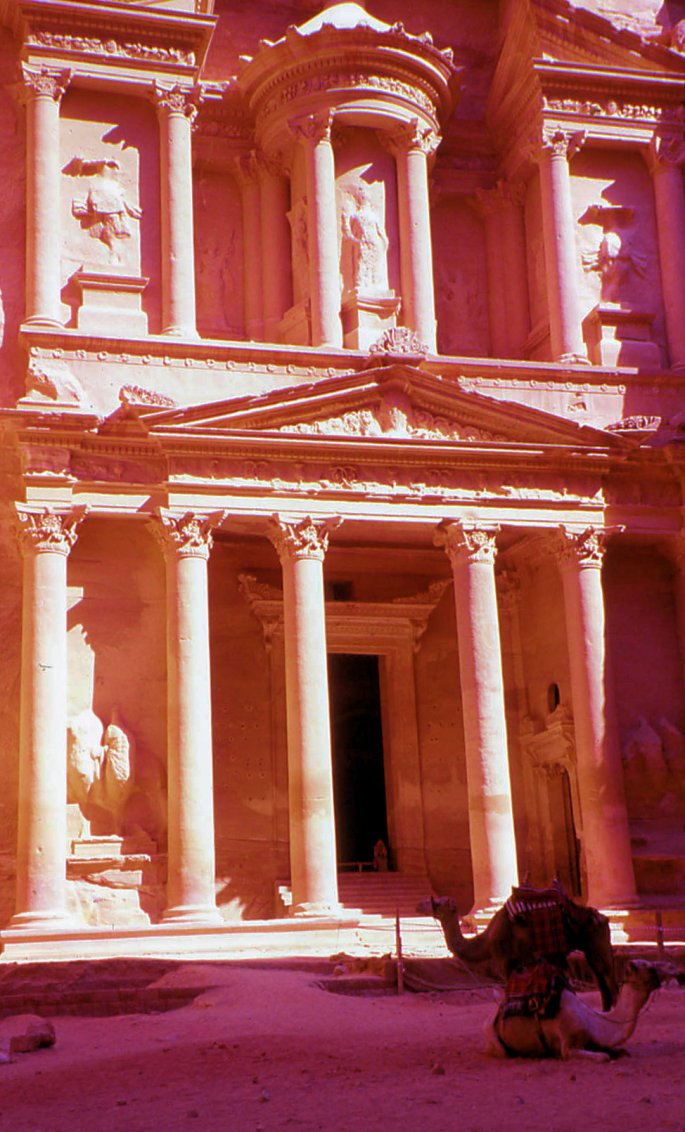 Looking through my images of Jordan I am struck by how much it offers the visitor in terms of not only historical sites, but scenery and serenity.  Serenity may seem a strange word to use about any Middle Eastern country these days, but Jordan has always seemed to me to be like a peaceful house surrounded by warring neighbours.

The pink-hued cliffs of Petra will always be the absolute highlight of Jordan, but close behind comes the capital itself, Amman.  Then a trip to Wadi Rum where maybe you can find time to stay overnight and sleep under the desert stars, an unforgettable experience, and a side trip to Aqaba, the Red Sea port.

You approach Petra through the Siq, or chasm, a winding defile hemmed in with towering red rocks that soar nearly 100 metres into the sky before it opens dramatically on to a square dominated by the pink sandstone of the façade, (used in the final scenes of the film Indiana Jones and the Last Crusades).  To emerge into the light at the end of the long walk and be faced with the glory of the Treasury is something that is hard to describe.

This 6th century BC world of temples, Roman theatres, monasteries and chambers carved into the red sandstone is Jordan’s best-known tourist attraction and a Unesco World Heritage Site.  Here the original inhabitants, the Nabateans, set up their city-state, defending their home with ease until 106 AD when it fell to the Romans.  After the Romans came the Byzantines, then the Crusaders, until by the 16th century Petra was all but lost to the west.   A Swiss Explorer, Louis Burckhard, penetrated the hidden city in 1812 and the world became aware of the wondrous city that had once been the centre of a trading empire that stretched from Saudi Arabia to Damascus. 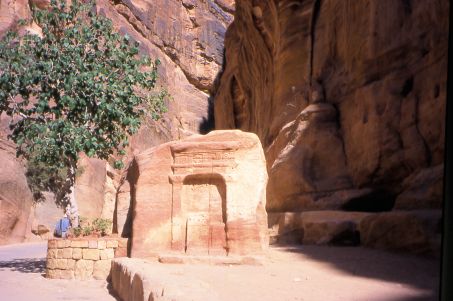 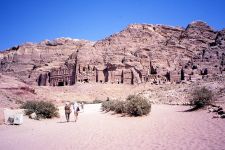 The Treasury was built to impress and 2,000 years on it is still impressive.  Protected from wind and rain, the detailing on the well preserved façade is still sharp and crisp.  It is estimated that 3,000 visitors per day visit Petra during the peak season and visitors are advised to visit between 9.00–11.00 a.m. and 4.00 – 5.00 pm when there are fewer tourists and the walls of the Treasury are suffused with a reddish-pink glow.  Although 3,000  may sound a lot of people, if you cannot visit between these hours Petra is large enough to hold that amount in reasonable comfort.   However, if you are not on a tour, it will repay you to make a really early start in order to savour the utter peace and stillness of the area before the hordes descend from the cruise ships – 7.00 a.m. is perfect. 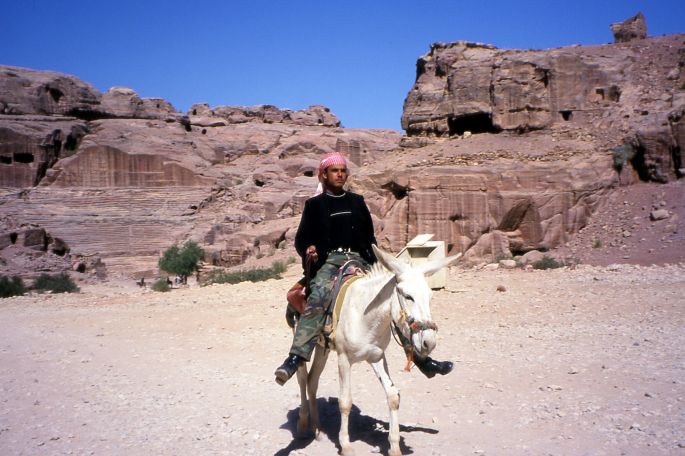 A whole day can be spent here, more than one if time allows because there is a lot to explore, the royal tombs, the 1st century AD Theatre, and the High Sacrificial Place which is reached by climbing 700 well-cut steps past extraordinary rock colourings.  Your reward is breathtaking views over Petra from a peak 170m above Wadi Musa.  No one knows for certain what took place here, whether the sacrifices were of animal or human, but evidence of some human sacrifices in surrounding towns/cities has been found. 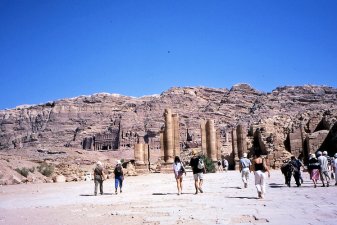 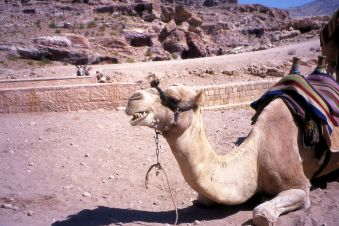 It will be very hot, there is no shade, so carry plenty of water.  For part of the way there is an option of taking a donkey ride or a carriage ride: the authorities discourage these because of the damage they do to the floor of Petra but they are available for those who need them. 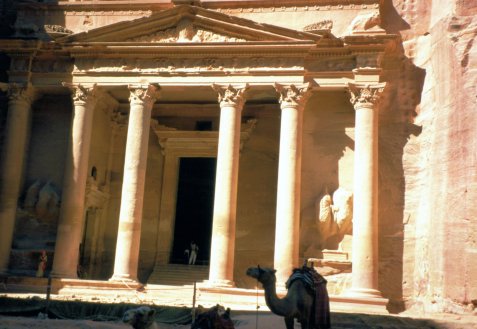 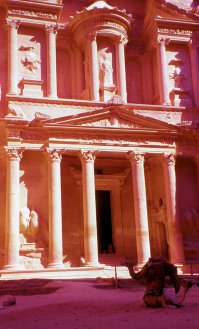 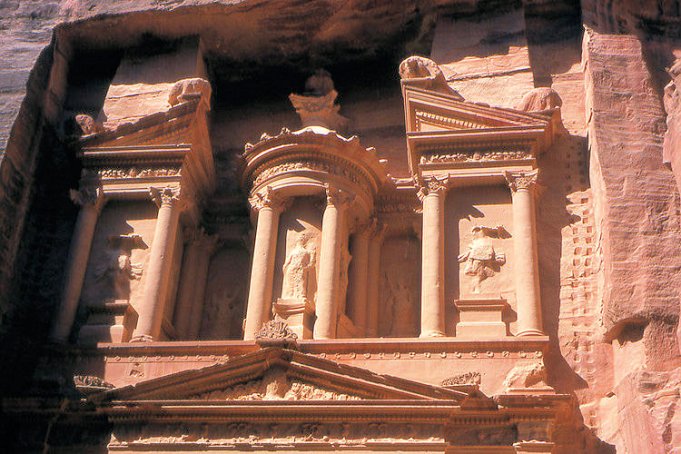 The camel was probably laughing at the tourists who were trying to bribe the owners of the few horses that were there to help those who couldn’t walk through the old city in the heat.  I won’t disclose the nationality of those who had disembarked from a cruise ship and thought to buy their way on to a horse, but they all seemed overweight to me.  Surprisingly, in this poor country, the horse owners insisted on first come firsdt served.  Or could there have been someone overlooking overlooking the situation, who wasn’t obvious to us?

Another reminder from that trip.  One in our group asked the guide if he could stop the sellers of jewellery from pestering us. He just quietly said., “No, Madam.  Your buying a small trinket from him could mean the difference between his children eating tonight or not”.  Something I’ve never forgotten when I’m feeling under pressure from itinerant sellers.

Two Medics And A Camera

When wanderlust takes over

Darkness, delusion, smeared with a stick of butter and laughter. Words collide, they bring forth death!