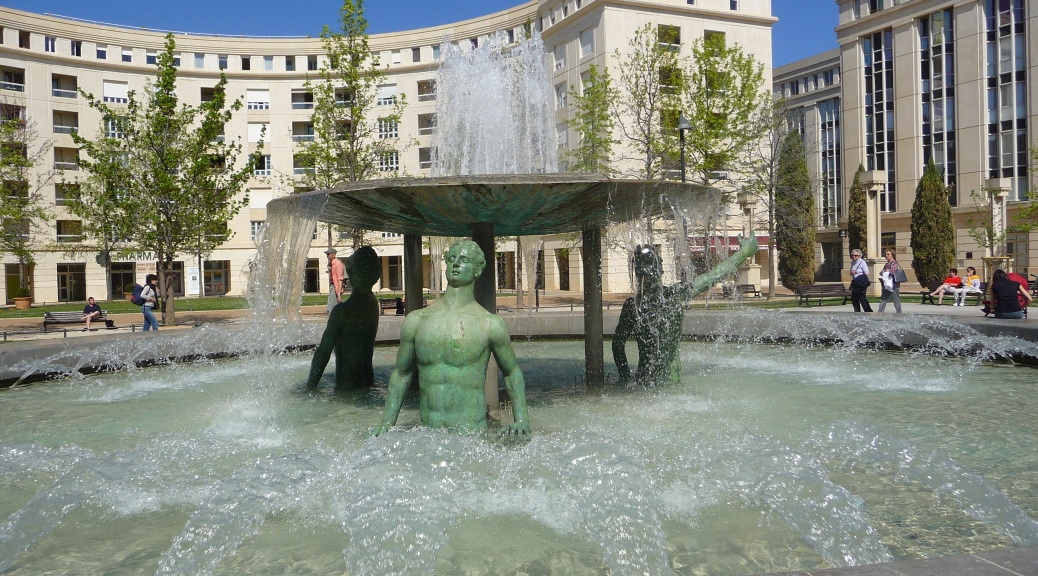 Montpelier had been experiencing rapid growth since the 1970s.  The city was on line to become the new regional technology centre and there was a need for expansion and for more public housing.  In 1979, the newly elected municipal council of Montpelier, with far-seeing vision, decided to develop a whole new district to provide for this expansion and link the centre to the River Lez.  The plan for the stunning development incorporated a west-east axis consisting of a landscaped boulevard and a series of squares enclosed by residential blocks each of seven-stories, to terminate in a new waterfront “port” along the Lez. 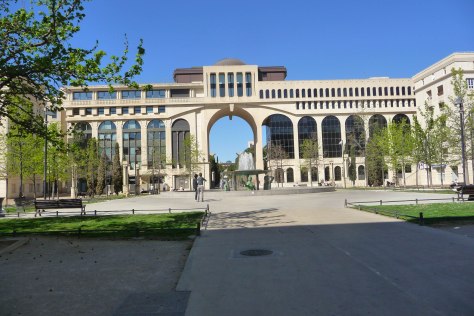 Magnificent Buildings along the 1 Kl-length of Antigone – Mari Nicholson

Thus did Antigone, surely the most attractive of new developments in France, c0me into being.  The 1-Kilometre length of this development was built on the grounds of the former Joffre Barracks, located between the old centre of Montpelier and the River Lez which meanders along the eastern side of the city.  It is known as the Champs-Élysées of Montpelier and the master plan was designed by Spanish architect, Ricardo Bofill – who also designed the majority of the buildings – as a series of grand neo-classical structures with pediments, entablatures and pilasters on a gigantic scale.

The Antigone squares are idealised, perfectly proportioned Renaissance spaces with grand names like La Place du Nombre d’Or.  Neo-classical Greek statuary that harks back to another age is dotted about the boulevards and plazas in streets that were planned to allow a paved walkway from Place des Echelles de la Ville to the River Lez.  A continuous movement of wheeled devices and small battery-powered minibuses provide transportation within the mall. 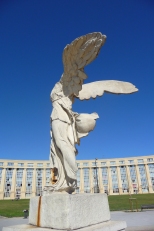 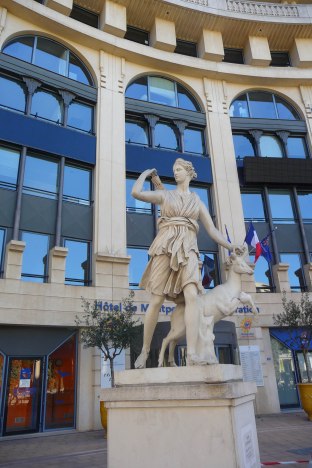 Antigone is an enormous project in every respect.   It includes about 4,000 new dwellings and 20,000 sq. meters of commercial space, the Languedoc-Roussillon regional government headquarters, office space, various government offices, restaurants and cafes, schools with special housing for students and artists, sports facilities, and underground parking.  This new development is town planning n a grand scale.

among the water spouts with Greek statue centre – Mari Nicholson

The only other project of this size and scale designed by one architectural firm is the Karl Mark Hof in Vienna, but this has a mere 1500 dwellings as compared to the 4,000 at Antigone and almost no other services.

A visit to this remarkable area of Montpelier makes it easy to see why it continues to attract worldwide attention.