Valencia may be going through a difficult patch at the moment with the credit crisis seeming to have hit it hard, but it’s a city that should be visited for the ultra modernity of its City of Arts and Sciences.  Those who now say Valencia shouldn’t have spent so much on this grandiose but gorgeous city had earlier been the first to admire and encourage Valencia in its endeavours.  The slideshow above shows part of this very modern metropolis, a park credited with having the most environmental and ecological value in Spain: it is beautiful at any time of the year and is well worth the short trip from the city centre.

Then the next day head off to La Albufera, the Nature Park just outside the city in the village of the same name.  Images below are all from La Albufera. 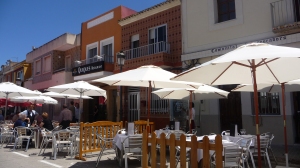 To get to La Albufera from Valencia is easy whether you use self-drive, bus or cycle.   Head south along the El Saler motorway for about 12 Kl. until the Lake of Albufera comes into view.

Lying between sea and rice fields, the lake and surrounding wetlands are separated from the Mediterranean Sea by sand dunes and pinewoods, a paradise for migrating birds. Serious bird-watchers should head for El Palmar at the head of the park where there is a tower from which to watch the birds.

This immense natural park and its surrounding rice fields, the crop from which forms the basis of the famous Valencia paella, and the canals dotted with fishing boats that hug the grassy verges of the lake, are less than 30 minutes away from the medieval splendour of Valencia, yet it seems like part of another world.

Lake Albufera is the largest lake in Spain and was formed aeons ago by sediment from the rivers Turia and Júcar which hem it in on either side sealing it off from the sea and making the 6 Kls. of water into a freshwater lake.   The innumerable canals leading to the lake are well used by fishermen who are usually to be found with their boats, ready to organize a relaxing trip on the lake or a fishing trip (bait and lines provided if necessary). Todos es posible (everything is possible) as they say in Spain.

Despite its size, the lake is estimated to be only one-tenth of the size recorded by the Romans. The remainder has been cultivated and turned into fields which in spring are drained and planted with rice seeds ready to be fertilized in May.  In July and August the Albufera is one enormous emerald paddi-field ready to be harvested in September.

As well as the water activities, the boat trips, and the walks along the lake, the popularity of the restaurants that proliferate along the canals and in the village mean that they are a major attraction to visitors from the outskirts and from the city.   They all serve typical Valenciana fare, and more typically, dishes from the area of the lake. One of these is Ali i pebre de Anguilas, a sort of slightly spicy eel stew with potatoes, tomatoes and garlic. For those unsure of their ability to eat eels, a small tapas ración can be bought as a trial sample.

Valencian paella is the other offering: eaten straight from the pan in which it was cooked, everyone having their own spoon, or if requested, it can be transferred to individual plates.

There are good sandy beaches near the town of El Saler together with a camping site. Natural sand dunes make up the 10kl Dehasa del Saler, backed by pine trees which provide necessary shade in summer.

Without doubt, the best beaches in Valencia are in the city itself, miles of golden, soft, sandy beach near the harbour and the King Juan Carlos Marina built for Valencia’s hosting of America’s Cup three years ago.  They seem to stretch for miles from the Esplanade to the sea (shoes necessary when the sun is hot) and the best seafood restaurants are dotted along the promenade.

Spending a day on the enormous sandy beach and around the harbour and marina is a perfect antidote to too much sight-seeing in Spain’s third most important city of golden-stoned buildings.

Photos and moments in life for a pause

A 60-something guy trying to figure out the world, and his place in it.

An escape to a different life; chronicles in Archaeology

All States Of Being

....are determined by mind

Travelling is my joy of living. Sit back relax and come with me.