It is often forgotten in the rush to visit yet another battlefield in France that just a few miles from England’s south coast, the only territory belonging to Great Britain endured almost five years of a harsh and brutal German occupation.

Hitler saw the Channel Islands as a strategic landing stage for an invasion of mainland France, and when in 1940 Churchill deemed the Islands indefensible (despite their heroic efforts to save Allied forces during the evacuation from Dunkirk) their occupation by the Germans became inevitable.

The story of Jersey’s occupation and the building of the tunnels is unfolded in slow and moving detail on a tour of Ho8 (Höhlgangsanlage 8), the kilometre long underground fortification that was conceived by the Germans as both store-rooms and a bombproof barracks.

Known as The War Tunnels, this series of galleries is the best known of Jersey’s many tunnel complexes built by more than 5,000 forced labourers from Europe and Africa – Russians, Poles, Spanish Republicans, French and Algerian POWs.

These men all suffered at the hands of the occupiers, but the most barbaric and brutal treatment was meted out to the Russians who were regarded by the Nazis as Untermenschen – subhuman.  They were abused, beaten, starved and, literally, worked to death.

Islanders will tell you that the dead Russians were shovelled into the walls and buried where they had fallen: just a few years ago these wall burials were one of the facts mentioned on the Tunnel tour but when I enquired this time I was told that there was no real evidence for this particular barbarity.

Just before the occupation there were approximately 50,000 people living on Jersey, mostly native islanders, some seasonal workers from Ireland, France and Italy and some Austrian and Swiss.   Amid the panic in June 1940 Whitehall gave the islanders the option of leaving within 24 hours or remaining on the undefended island: by the end of the day nearly half the population had registered to leave.

Many changed their minds, however, when they saw how the people were packed, for the journey, like sardines on the only transport available – coal and cement boats – and eventually only 6,600 left. From the beginning of the occupation in July 1940, up until December 1940, there were only 1,750 German soldiers on Jersey, but within a year the number had increased to 11,500.

To the Soldaten it was a paradise, a holiday island with shops full of goods, gardens full of flowers, and a not too unfriendly people.  Photographs lining the tunnel walls show them relaxing on beaches in the sunshine, swimming, motoring, walking, young men enjoying a near normal life – a long way from the middle of war. 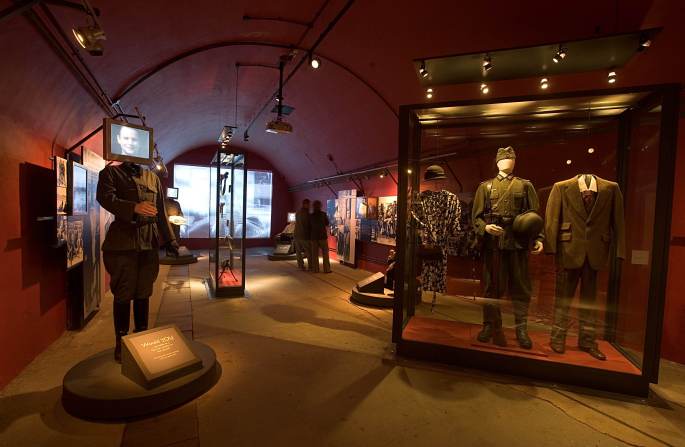 But the atmosphere changed on October 21st 1940, when the Order was passed demanding a register of all known Jews and Jewish businesses.  In June, 1942, it was ordered that all wirelesses be handed in and just three months later, on September 15th, the Order came for all British-born islanders to be deported to Germany.   Over several days 1,200 of them were led away to an unknown fate with more deportations following in February 1943 when the Germans rounded up the remaining Jews, Freemasons, retired army officers and protesters.

And now food was getting short.  Tea was made from bramble leaves or carrots, coffee from acorns or roasted parsnips, shoes were repaired with bits of wood, clothes cut from old curtains, and lipstick made from oil and coloured dyes.  Soap was a rarity (sand mixed with ash was used as a substitute) gas was cut off every evening, and communal bake houses and soup kitchens were opened.

Some girls found it hard to resist the handsome young blond soldiers and there was a certain amount of fraternisation despite the stigma it carried: the other islanders called them ‘Jerry bags’ and worse.  They weren’t the only ones who fraternised, however.

Lack of food and clothing was a great incentive to work for the Germans because of the high wages paid and the extra rations given. There was resistance to the occupation in the form of painting V-signs on buildings, the theft of arms and explosives from barracks, and the use of the forbidden radios: if caught, the penalty was harsh – deportation to a concentration camp in Germany.  The same punishment was meted out for offering food and shelter to escaping POWs and it is recorded that three members of one family were deported for merely offering some food to starving prisoners:  one member of the family died in the gas chambers at Ravensbrὒck.

These are the stories you hear as you walk through the underground galleries, each dedicated to a period.  There are last letters written to loved ones, daily printed Orders from the German occupiers and tableaux showing German soldiers speaking careful English to the young women of Jersey.

But the most moving of all images are the pictures of the starving Russian POWs dressed in rags, whose dark, haunted eyes staring out of the photographs speak of their utter despair.  It is an exhibition that tells the story of the Occupation in the words and pictures of the people who lived through it.

The final, unfinished, tunnel is black as the deepest night, a flickering light at the end of the tunnel the only sign of the outside world.  As you grope your way through the darkness, a tremendous noise erupts and echoes around the cavelike space as though the world were about to end.  The earth seems to vibrate beneath your feet, the sound of rocks crashing round about is deafening and there is an overwhelming feeling that the ceiling is about to collapse, burying you forever.  And you think back to the pictures of the POWs you’ve seen and you know why each one wore a haunted look.

The Normandy landings in 1944 heralded the final phase of the German occupation of the Islands, but it also meant that the supply routes were cut off.   For the next eight months, the local population and the 28,000-strong German garrison were close to starvation both sides vying for the sparse grasses, berries, and edible tubers that were in the fields. Churchhill refused to help the islanders as he considered that the Germans, who were caught between France and England with no hope of escape, would benefit from such assistance.

The Germans acted with surprising decency towards the end of the war.  When Red Cross parcels arrived for the starving people of Jersey, the soldiers delivered them to the houses and it is recorded that no parcels were opened and that no food was stolen.  It is almost hard to believe, considering that they too were starving and considering also, their former behaviour.

Outside the tunnels, The Garden of Reflection provides a peaceful place in which to reflect on the suffering of the islanders, rendered defenceless by the UK and forced to find a way of existing with the enemy, and of the POWs who lived lives of utter misery and degradation.  The lives of all are brought vividly to life in the tunnels of Ho8 Höhlgangsanlage, the Jersey War Tunnels.

ALL  FULL PAGE IMAGES ARE COURTESY OF JERSEY TOURISM