Miyajima is considered to be one of the three most scenic spots in Japan and I’m not going to argue with that.  I was bowled over by it: besides, it is a World Cultural Heritage site and is regarded as a holy shrine of Shinto by the Japanese.

Part of the city of Hatsukaichi, Miyajima is located in the Seto Inland Sea and is easily reached by tram, train, and boat from Hiroshima for those wishing to experience a complete contrast to that city.   The journey from Hiroshima takes approximately 1 hour.

The island, for the Japanese, is a place of natural worship, stemming from its ancient history, the mountains in which Gods are still said to reside with Mt. Misen at its peak, and the primaeval forests which, even in daylight, appear dark and forbidding.  As the entire island is an object of belief, it has remained untouched and in a natural state. Massive rocks are scattered along the coast and on the mountains of which no one knows the provenance and in the forests is a diversity of plants said to be the epitome of Japan.

From the forests and wooded slopes come the deer that one sees wandering through the town.  Over the years they have become used to people and they are perfectly happy living in close proximity with humans.   At night they sleep by the river that runs through the town.

But what attracts most of the Japanese to Miyajima are are the several temples dotted around the island, one of which houses the eternal flame lit approximately 1,200 years ago and part of which was used as the pilot light for the eternal flame in the A-Bomb Cenotaph in the Peace Memorial Park in Hiroshima.

Away from the quiet sea front with the amazing Torii gate and the gentle animals wandering around the paths around the inlet, lies the main tourist area.  This is real tourist land, swarming with day trippers and weekenders, who surge up the main street lined with restaurants, noodle shops, ice-cream parlours, souvenir kiosks and shops specialising in kimonos, fans, artwork, and embroidery. 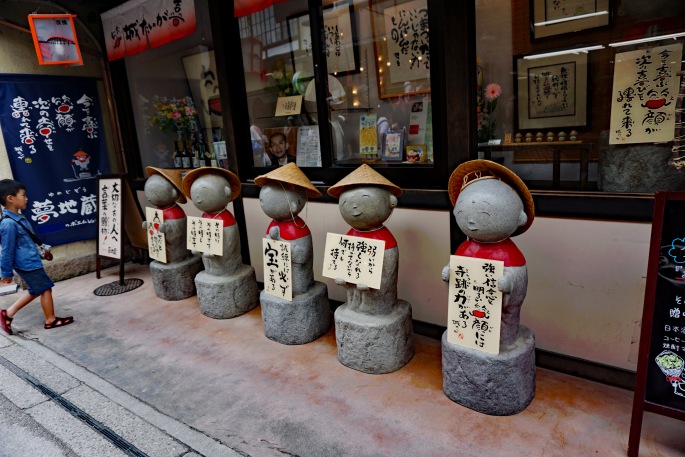 From the beach, boats ply for hire to take one around the famous giant torii gate which, at high tide, seems to float in the sea (a perfect photo-opportunity) but it is advisable to know the tides if you want to take advantage of this trip.  A good photograph can be taken from the beach but with today’s digital use, selfie sticks and video cameras it can sometimes be difficult to take that perfect picture, and you may have to queue patiently while others take their time posing.

As well as temples and shrines within walking distance, the centuries old Itsukushima (the former name of the island) shrine in the small inlet where the ferry arrives, is one of the most popular on the island – and it includes a small Noh stage.  Most of the shrines on Miyajima, like the famous red torii gate, are built over the water, lending the image an ethereal feel especially on a misty day – of which there are many in this area.

A visit to Miyajima is a perfect day out if you want to see a part of Japan that will overthrow preconceived ideas, and a place where you can sample as many different dishes as you can imagine. Bearing in mind that Miyajima is noted for its oysters, be sure to try these: they are served in many different ways.fried, boiled, grilled, and au naturel.  Dumplings are another favourite on the island, as is the ice-cream served in a Brioche bun: western food from hamburgers to fish and chips is widely available, so everyone can find their particular comfort food.

The Island is one of the most popular places for weddings and these are well worth seeing – and photographing – as the bride and her immediate entourage are dressed in the most elaborate kimonos, all of which will have cost many hundreds of pounds (or they may have been hired as we in the west hire morning suits and top hats) while the groom and his attendants are also dressed in the male equivalent.   The transport too will be elegantly laid out, usually rickshaws in the lucky colours of red and gold – quite a sight. 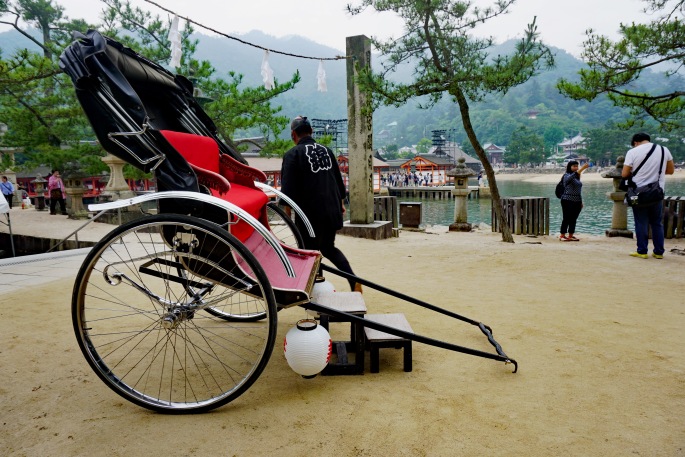 A Rickshaw with Driver (in black) awaits the Bride – Mari Nicholson

If you can stay overnight it is even better because after sundown the shrine and gate are illuminated until nearly midnight, a perfect backdrop to a walk along the paths around the inlet.

One thought on “MIYAJIMA – Beautiful Island in Japan”

What Lorna Saw Next
A.&V.travel