At one of Brighton’s seafood restaurants yesterday I had some amazing mussels, the like of which I hadn’t expected to find in the UK.  They reminded me of the time I was in Galicia in Northern Spain and my trip out to the mollusc beds to see them being collected, and an even better recollection, the meal we had on the return boat journey of mussels cooked simply in wine and garlic in a traditional enamel pot and served with fresh crusty bread and bottles of unnamed, in fact unlabelled, wine, which nevertheless tasted like nectar.

Galicia in Spain’s green north is a far cry from the Costas and is nowhere as well known as the southern provinces, yet it is probably the most beautiful part of Spain with really white sand beaches, fragrant pine trees perfuming the air, beautiful buildings, great hotels, and wines produced in small quantities and kept for local sale only.  If you think only of sun, sand and Sangria, think again and head for Galicia for seafood, shellfish and the road to Santiago.

O Grove was once an island but today it is joined to the mainland thanks to the winds from the south-west, which have caused the surrounding sands to form an isthmus and it now sits on the mouth of the Arousa estuary, a stone’s throw away from the luxury Parador Pontevedra.  As well as shellfish gathering and shallow-water fishing, the local population of approximately 12,000, lives from the farming of mussels, oysters and scallops.

Ropes, on which the molluscs grow, are hung from bateas, wooden platforms in the water, and these heavy ropes which can weigh up to half a ton when the mussels are fully grown, are checked out and collected daily.

From your boat you can watch the men drag up the heavy ropes of scallops and mussels as they stand on wooden rafts in the water, the bateas.

Since 1963, the port of O Grove has staged a yearly festival which takes place over several days during the first two weeks in October.  Many excellent local wines are available but it is almost compulsory to drink the local “Rías Baixas”  as an accompaniment to the wide variety of seafood but, believe me, it is easy to get a taste for this little-known wine (little known outside of the area that is).

At the festival, visitors can wander among the food stalls, sampling delicious seafood cooked by locals, dishes that exploit the riches of the surrounding Atlantic Ocean including mussels and turbot, for which the region is famous, oysters, clams, shrimp, scallops, velvet crabs, crawfish and goose barnacles.  O Grove’s seafood festival also comes with music and dancing.  Every day different bands play traditional Galician folk music which includes a lot of Galician bagpipes, and there is the usual folkloric content in singing and dancing.

Local boats make trips out to the mussel and scallop beds and these can be booked at any of the agencies around the port.

Should you want to do some local sightseeing there are a couple of local towns worth visiting, and the busy city of Vigo is an hour or so on the train.  You can even visit Santiago de Compostela for a day.

What to see nearby:

Illa de AToxa, whose fame is derived from its medicinal mineral waters and mud, the therapeutic properties of which for the skin and respiratory passages as well as the salts and soaps which are made from them, have turned the island into a major spa resort.  AToxa is the biggest of the half dozen islands, which emerge with the ebb and flow of the tides on the O Vao mud flats. 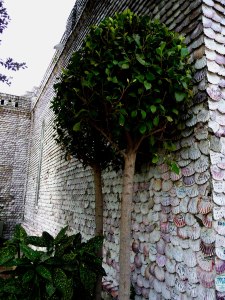 Isla de La Toja or Isla de la Atoxa where the main building to visit and to photograph is the hermitage church of San Sebastian dating from the XII century.  It is completely covered with scallop shells to protect the façade – quite an amazing sight.

4 thoughts on “Gathering in the Mussels & Scallops”