With the UK about to depart the EU albeit with an extremely narrow margin of Leave votes, my thoughts turned to my visit a few years ago to Strasbourg, site of the European Council and European Parliament and one of the loveliest places in Alsace.

This delightful city with its medieval churches and half-timbered houses seems to have become a byword for what some in the UK see as a hijacker of British sovereignty.   Which is a shame, because that idea is blinding people to an elegant, international city of great charm that in the Middle Ages was referred to as The Crossroads of Europe.  At that time, goods from the Baltic, Britain, the Mediterranean and the Far East poured across the borders to be traded for wines, grain and fabrics and just like today, when the languages of the 46 member states can be heard in the squares and streets of the city, traders speaking a dozen different languages, met and conducted business.  The city continues to be the crossroads of Europe  as people from different countries work and mingle in Strasbourg’s squares just as they did hundreds of years ago.

Once a free city within the Holy Roman Empire, Strasbourg later came under periods of French and German rule, which has given the ancient centre a unique appearance, half-timbered medieval houses sitting alongside elegant French-style mansions.  In 1988, UNESCO classified Strasbourg as a World Monument, the first time such an honour was given to an entire city centre. 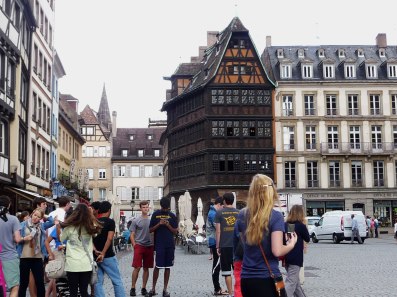 It is an easy place for visitors to discover as the traffic problems that beset most big cities have been solved here with a combination of canal boats, a sleek and comfortable light rail system, local buses, and pedestrianised squares.  Although it presents itself as a folksy-like small town, Strasbourg is very international, cosmopolitan and multilingual. 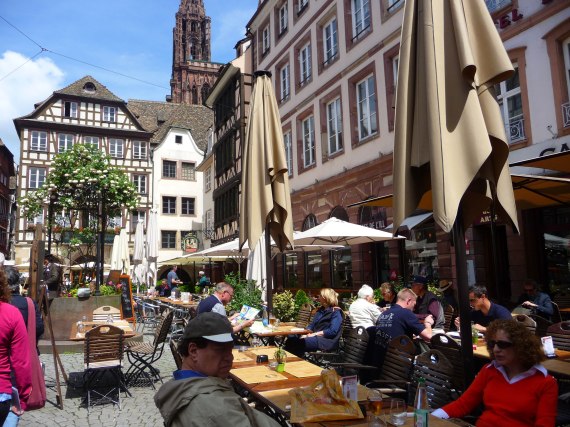 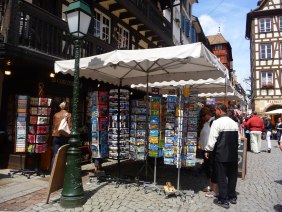 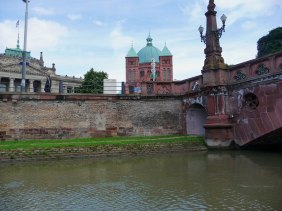 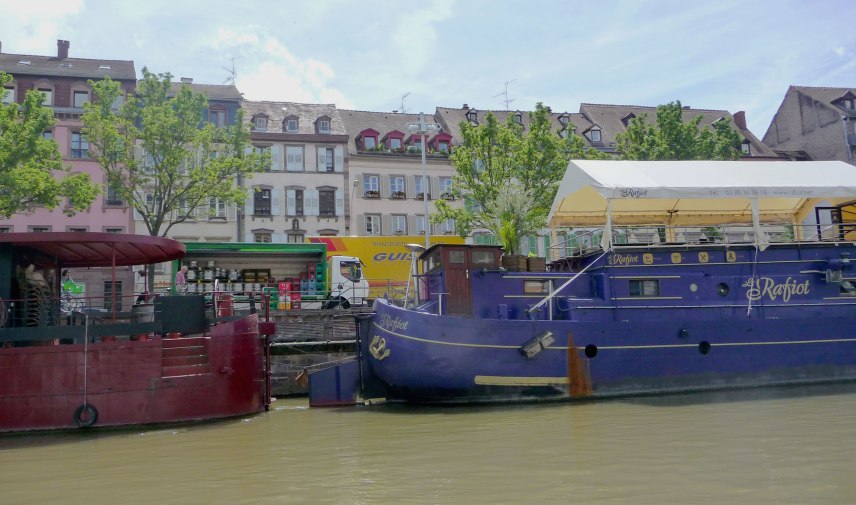 This is the historic part of the city where you will find the main sights and using the 142-metre high spire of the Cathedral as your landmark, you will soon find your way around Strasbourg. 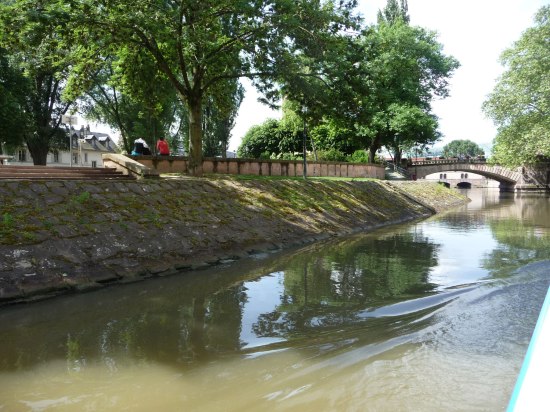 The city’s charm has much to do with its canals which surround the Grand Ill island where Petite France, is located.  A 70-minute boat trip (open-top in fine weather) on Batorama’s Twenty Centuries of History, circumnavigates the whole of the Grande-Île before skirting the 19th-century German Quarter.  The turn-around point and good photo opportunity is where the European Parliament, Council of Europe and European Court of Human Rights are head-quartered, a magnificent display of concrete, steel and glass.

On the boat cruise you will see the Vauban Dam, near the confluence of canals by the Pont Couverts, a defensive lock which allowed the entire southern part of the city to be flooded in times of war.  It is 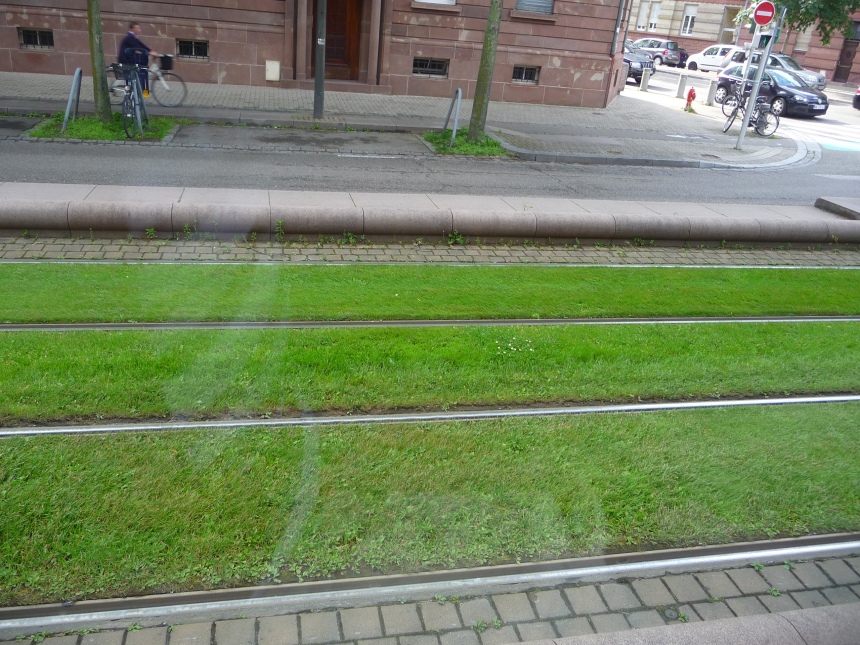 They even grow grass between the tramlines in the street

Walking around the canals, especially in the early part of the year when everything seems green and lush and the spring flowers are out in abundance is an equally attractive way of seeing the main sights.  This is a city that loves nature and it takes pride in decorating every bridge and windowsill with baskets of flowers, changed according to the seasons. 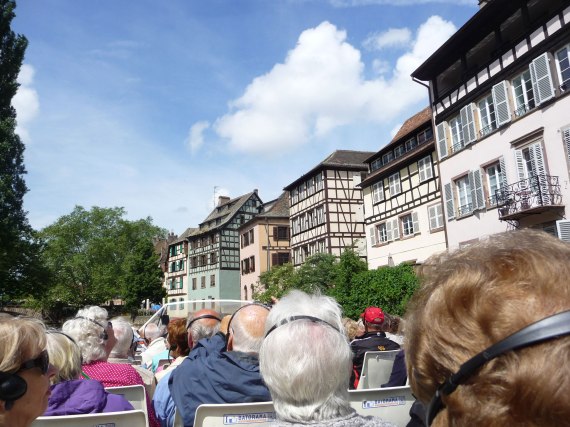 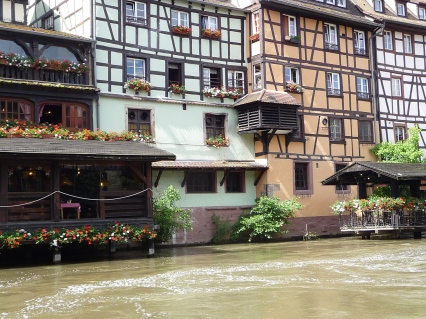 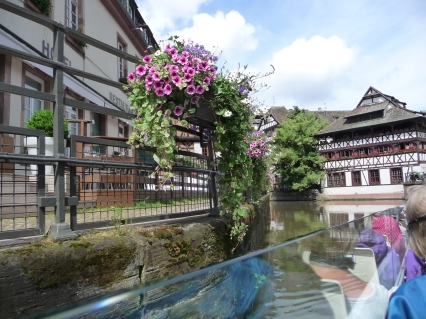 The number one attraction in Strasbourg is Petite France, a photographic cluster of 16th and 17th-century half-timbered houses reflected in the waters of the canal.  These houses were originally built for the millers, fishermen and tanners who used to live and work in this part of town.  If you have taken the boat tour, you may like also to take a tour of the historic centre with an audio guide (€5.50) from the Tourist Office which will introduce you, via a winding route through the narrow streets, to a truly fascinating old town.

The Cathedral, an imposing red sandstone edifice, stands alone in its square and towers above the city.  It was the tallest building in the world until the 19th century and is the second most visited cathedral in France after Notre Dame in Paris, receiving 4 million visitors a year.  Built in 1439 it is considered to be an outstanding masterpiece of Romanesque and late Gothic art with outstanding 12th-century stained glass windows. Inside is one of the world’s largest astronomical clocks. 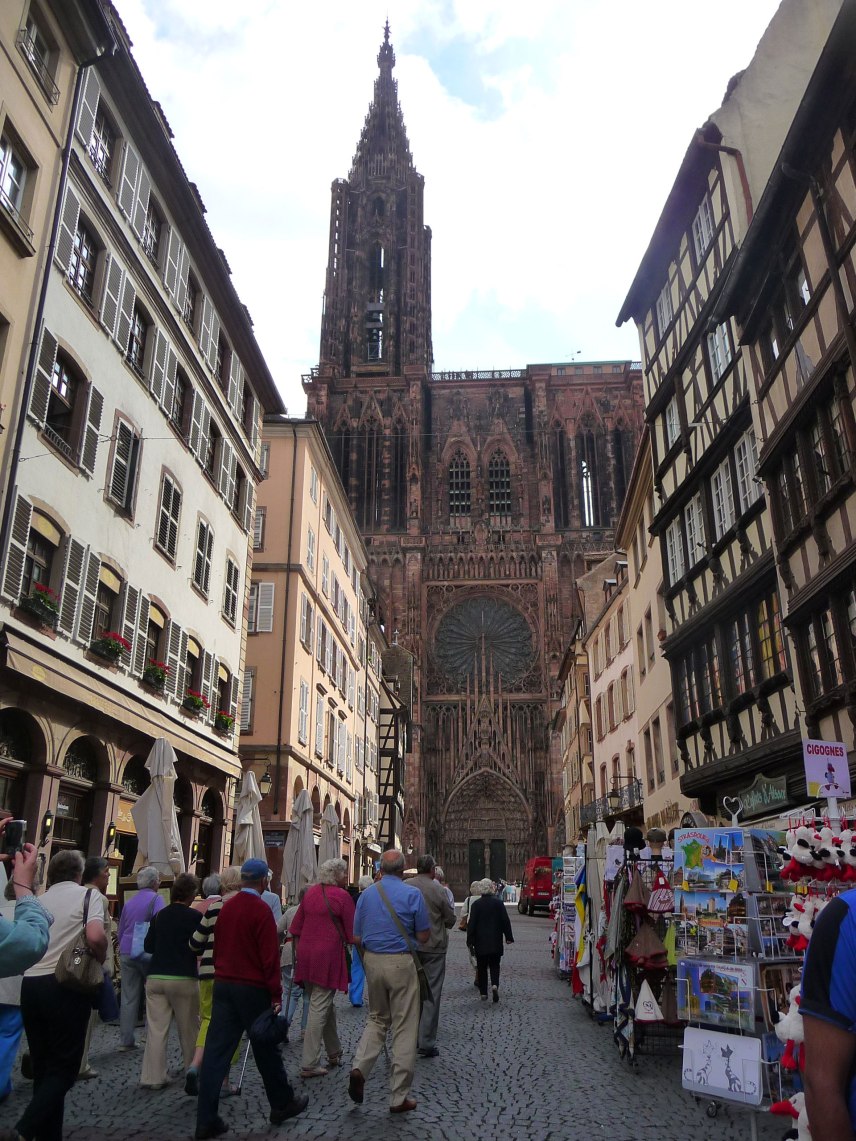 Try to arrive at the cathedral by noon to get a good viewpoint for the 12.30 display of the famous Astronomical Clock.  The procession of sixteenth-century automata was designed to remind us of our mortality.   Afterwards, you can climb 332 steps to the platform below the cathedral’s twin towers for a stunning view.

The narrow street that leads to the cathedral and the Place de Cathedral are the liveliest places in Strasbourg, especially in summer, and are filled with outdoor restaurants that remain open late into the night.  Entertainment is in the form of jazz musicians, mime artists and clowns.

And finally, Strasbourg’s Christmas Market has a high reputation but its popularity may be its undoing.  After a few evenings of mulled wine, yuletide cake, Silent Night and Adeste Fidelis, a spring or autumn visit begins to look very attractive.

Strasbourg is a city that has a very special charm at any time of the year and the organisations that dominate its life are what still guarantees peace in Europe.  If you are looking for culture, cuisine and character, Strasbourg is hard to beat.

Pain d’Epices, 14 Rue des Dentelles, for indulgent gingerbreads and cake and for the heady scents of spices.

Master-Patissier, Christian Mayer, offers a tea room second to none in Strasbourg at 10 Rue Mercière, just a few yards from the cathedral.

Maison Kammerzell 16 Place du Cathédrale, tel +33 3 88 32 42 14, where the oldest section dates back to 1427, is a Strasbourg institution.  Occupying rooms on four floors, you can sample the house speciality of fish sauerkraut if you fancy that but there are many less thought-provoking dishes from which to choose, average €40 for three courses.

The Batorama Tour departs from the Quai outside Palais Rohan, adults €12.50.

A ticket with unlimited tram and bus trips valid for 24 hours is available for €4.30. Also, you can rent bikes (vélhop) for $5 per day.

This is a blog about places to see animals and unusual attractions in Japan and abroad.