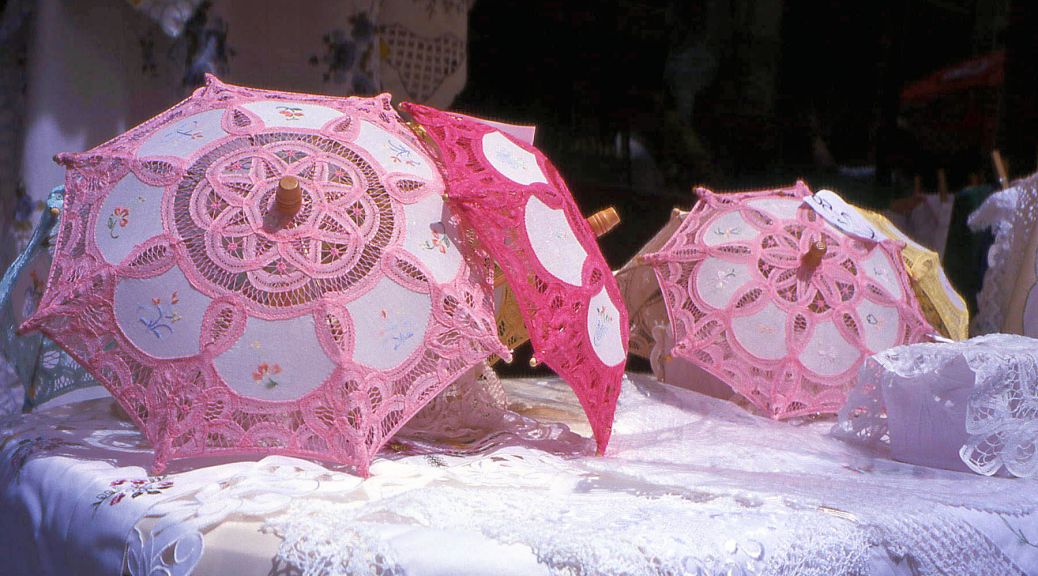 Once bitten forever smitten, they say of Cyprus, and I can vouch for that.  Lying at the crossroads of Europe, Asia and Africa, this island of Aphrodite, Goddess of Love, offers a magical blend of romance and relaxation in a landscape untouched by time – away from the coastal resorts that is. 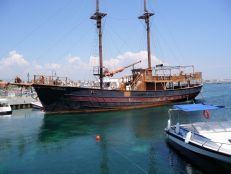 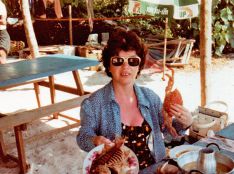 I fell for its charms many years ago when a Zorba-like boat captain whisked us off in his boat for a seafood picnic on an offshore island, later to watch the most glorious sunset I’d ever seen.  In retrospect, the colours of the setting sun and the purple and pink skies probably owed a lot to the wine consumed on deck but that was the start of my love affair with the island.

The legendary birthplace of the Goddess is a golden yellow rock that juts into the sea on the coastal road between Limassol and Paphos, and 4,000 years on from her tempestuous birth from the foamy ocean, her legacy of love is still attracting young and old.  Swim around the rock three times and you will retain your youthful looks, I was told!

Unfortunately I didn’t have time to test this offer as we were on the way to Paphos to visit the ruins of the nearby ancient city-state of Koúrian, wonderfully situated on the cliffs above the sea, where we sat on the steps of the amphitheatre imagining ourselves as 5th century theatregoers, before wandering off to a nearby site to admire the still discernable central heating system and bath-houses and the well-preserved mosaics of fighting Gladiators. 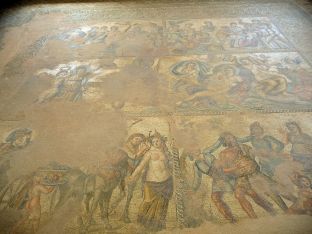 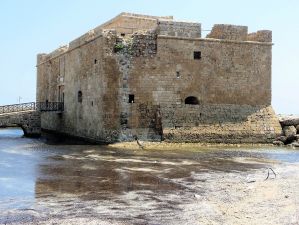 Four thousand years of civilization and priceless cultural treasures are visible in Paphos where the harbour, still used by the local fishermen, is the focal point of the town, and cafés, bistros and bars line the waterfront.  As the sun sets and the fishing boats chug out to sea for the night’s trawl the medieval fort on the edge of the sea turns honey coloured, lovers stroll up and down the promenade and from bars and restaurants, the musical sounds of Zorba the Greek can just be heard above the tinkle of ice in glasses.   And yes, I know Zorba wasn’t a Cypriot, but the music is everywhere and everyone seems to like it. 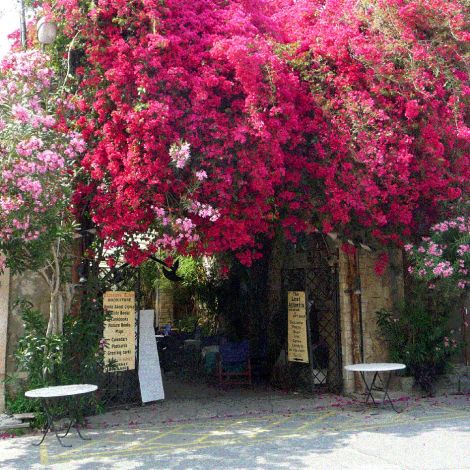 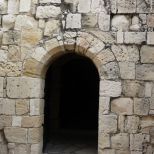 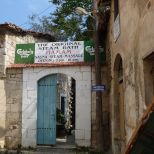 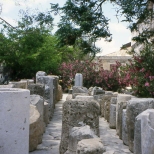 If time allows, it is a good idea to alternate days on the beach with days in the mountains, and in this case, Limassol, Cyprus’s second city, is your best base.   You’ll eat well in this town, and cheaply, whether you like chips with everything (Cyprus is big on chips – a boon for those with children) or want to try some of the local dishes like kleftiko (lamb cooked in the oven until it falls off the bone), stifado (a sort of beef stew) Afelia (pork marinated in red wine) or the famous meze (a selection of meat and fish dishes).   With hotels from budget to 5-star, a public beach with changing tents, sun-loungers, jetties on which to stroll, and that always sparkling sea, there is something for everyone. 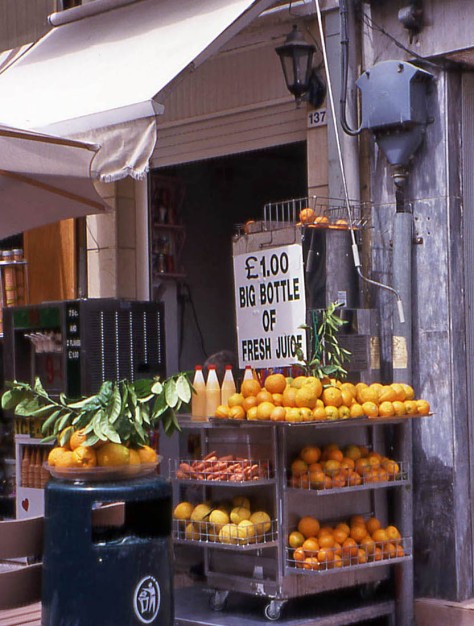 Some of the beaches are man-made and the long 8-mile strip of development may appear bland but don’t dismiss Limossol too quickly: the old town makes up for the modernity of the new. There is a daily market that shouldn’t be missed, where soft velvety peaches nudge scarlet cherries, and melons and apricots tumble in perfumed profusion.  And buying a pint of freshly squeezed orange juice for 1 Euro just has to be a bargain.  At night the Tavernas by the Old Harbour offer great seafood and in many of the restaurants you can join in the Greek dancing – to Zorba the Greek, of course – if you have the courage. 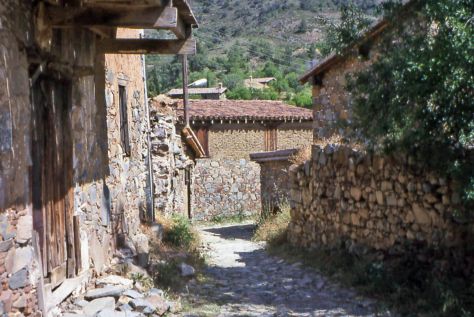 If you like driving, Cyprus is one place you should avail yourself of a 4WD.  Up in the Troodos mountains, steep hairpin bends and the lush green mountain backdrop gives way to ancient cobbled trails that lead to peaceful villages nestling on the slopes of 6,500-foot Mount Olympus. 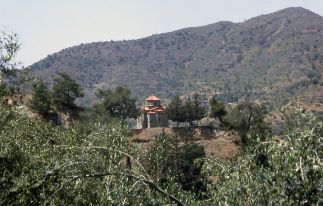 In the fields round about, brown and black goats chomp the grasses among the rosemary and thyme.  Lizards and butterflies vie for your attention and during the mild winter, almond trees blossom and lemon and orange trees perfume the air, but in the summer flowering pink oleander and broom cover the hillsides, a magnet for the bees that produce the exquisite Cyprus honey.  At certain times of the year, birds from Africa, Asia and Europe swoop overhead in compelling formations as they migrate to their various homes. 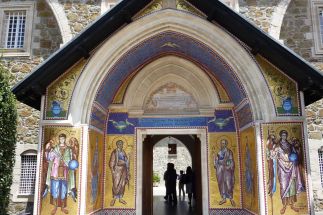 Most of the villages have an ancient monastery displaying time-worn frescoes and rare icons, and a familiar sight is a monk in full black robes sitting outside his tiny chapel, usually with a mobile ‘phone clasped to his ear.  In the afternoon the only sound is the slap of counters as old men play backgammon in the inky-dark bars of the villages.

Kakopetria set in the northern foothills of the Troodos is one of the loveliest mountain villages.  It straddles two fast-flowing streams in the middle of which lies the old village, lovingly brought back to life by local craftsmen.  Wooden houses with ornate verandahs filled with lemon geraniums and perfumed roses line the narrow streets and the village women making lace shelter from the sun under vine trellises. 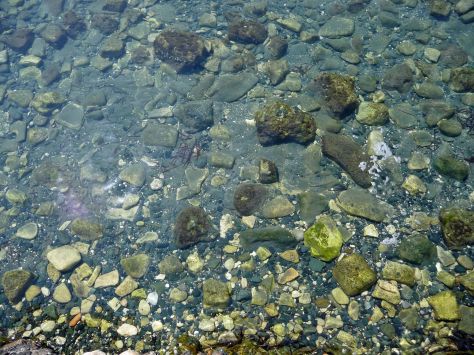 In complete contrast is Aiya Napa where you’ll find the island’s best beaches, soft golden sands leading to gently shelving seas.  But, Ayia Napa is not for everyone: this is clubbers’ paradise, the “new Ibiza” the so-called “Garage-music capital of Europe” with lighting and sound systems to equal anything London has to offer.  Top UK DJ’s are resident during the summer, the clubs are mega with most having a capacity for over 2,500, and none of them open before midnight.  Those still awake during the day can shop till they drop from designer to downright dodgy goods and for the kids, there is a Waterworld theme park based on the Greek Myths, more family fun than white-knuckle, from April to mid-November.

Inland from here is the island’s capital, Nicosia, and a visit to the old walled city is worthwhile if just for the walk back in time through the narrow streets of The Folk Neighbourhood – Laïki Geitonia – a renovated pedestrian area of bargain-filled artisan’s shops.  And if borders fascinate you, you can walk to the ‘Green Line’ and from a platform look over to the Turkish side of the island. 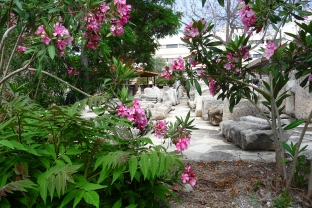 Larnaca seafront has an air of sleepy charm with cafes and tavernas lining the palm-fronted promenade but it has little to recommend it apart from its good museums and interesting monasteries but if you want the best seafood in Cyprus then head for MacKenzie Beach just outside the town, where the restaurants along the seafront are outstanding   Reservations are needed if you want Sunday lunch as this is the day Cyprus’s extended families eat out, just like in France. 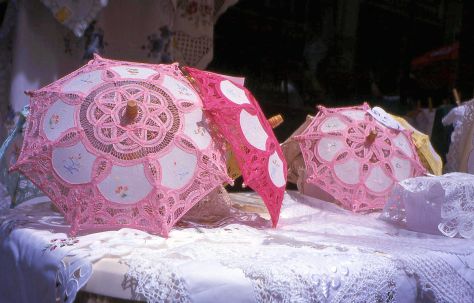 Cyprus is one of those blessed islands that can cater for those wanting antiquities and those who want nothing more than to soak up the relentless sun and bathe in the warm, azure sea.  It feels very familiar to visitors from the UK with familiar British chain stores, driving on the left and English being widely spoken, but the 340 days of sunshine and the laidback atmosphere leaves you in no doubt that you are abroad.