In Seville last week I had my camera stolen on the third day of my four-day break, a major blow as this time it was my zoom camera so the images I took were different to those I’d taken on my last visit and, I like to think, better.

However, after an evening of crying into my Rioja, I just had to get on with things and determine to be more careful in future.  The loss was my own fault.  I had the camera on a table at the Casa de Las Teresas bar, probably the most famous bar in Seville, moved to look at some pencil drawings on the wall in front of me which left the opening for an opportunist to walk by and whip the camera away.  My travelling companion had been sitting there too but was looking out through the door at something happening in the street.  It was a daring move to grab the camera from under our eyes like that.

We still had four glorious days in Seville which is a genuinely over-the-top city of bulls and flamenco, dark-eyed beauties and white-washed alleys, a blazing sun beating down from a dark blue sky and never-ending late nights.  It’s the place to go if you’ve fallen for the romance of Carmen, Hemingway’s Toreros, and the lure of castanets and cante hondo, and if you want to drink manzanilla in a white-washed bodega late at night, or ride through the dappled park in a horse and carriage.  Seville is Spain’s party town and I love it.  I was seduced by its magic a long time ago and have never recovered.

We spent most of our time wandering the old streets of Santa Cruz, but we also managed to spend one afternoon at the Plaza de España, one of Seville’s show-offy bits, built for the Ibero-American Exhibition of 1929 (Expo 29) and located in Maria Louisa Park.  The following photographs were all taken 3-5 years ago. 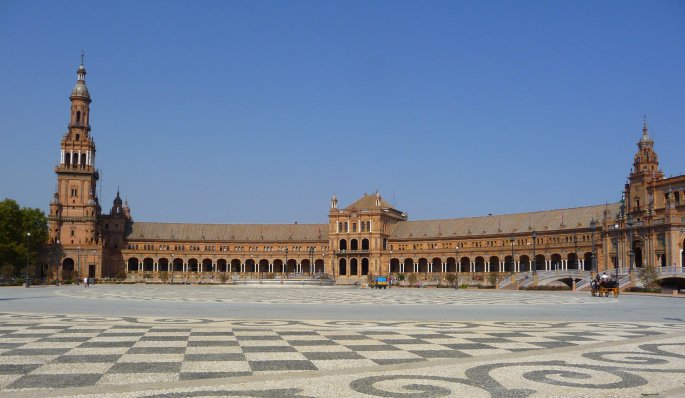 This massive building is the city’s most impressive edifice – after the cathedral – for its sheer grandeur.  Some people hate it, thinking it overblown and ornate, a blot on the older Seville, but I love it.  What is certain is that no one should miss it on a trip to Andalucia’s capital, along with the many pavilions in and around the Parque Maria Luisa.

The Plaza de España is a lavish Renaissance/neo-Moorish semi-circular brick building with a tower at either end, major landmarks as they are tall enough to be visible throughout the city, and it is said to be the size of five football pitches.  In front of the building, following the curve of its façade, runs a 515-metre canal forming a moat on which hired boats can be gently rowed, a real pleasure when the heat is intense. 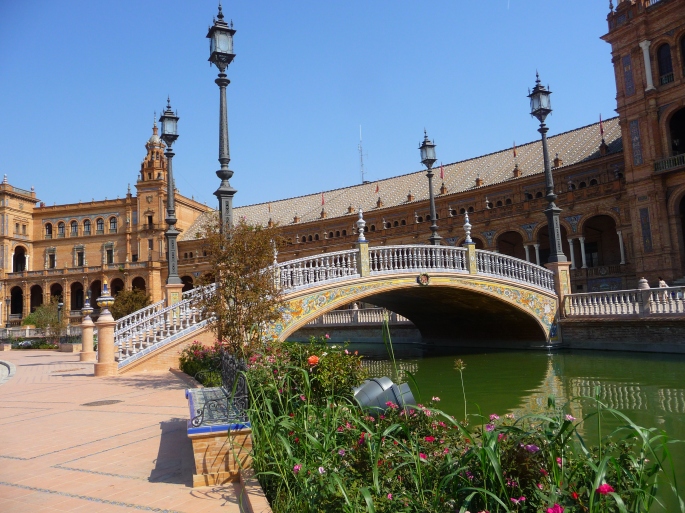 Elegantly curving over the moat are four bridges representing the four ancient kingdoms of Spain, Castille, Aragon, Navarre and Leon. 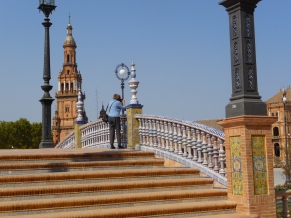 Their supports are made of brightly painted ceramic tiles, which add an extra zing to the architecture, and in the centre of it all is the Plaza itself.

On top of the ground level portico there is a first-floor balustrade with balconies stretching along its length. Along the wall by the canal are 48 alcoves with tiled benches, one for each province of Spain, each with a relevant tableau and map designed on colourful azulejos, the painted ceramic tiles so popular in this part of Andalucia.

In fact, coloured ceramics feature heavily around Plaza de España –  the provincial alcoves, the walls, ornate bridges and balustrades being all covered in painted tiles. 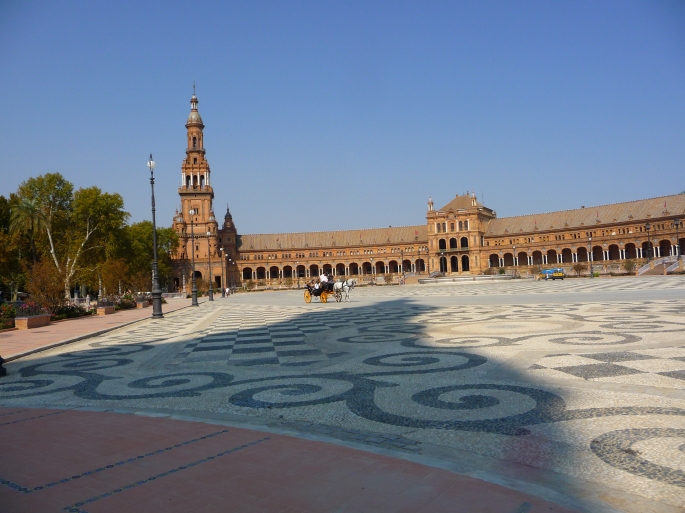 The architect of this amazing building which swings around the plaza in a large semi-circle was Anibal Gonzalez who designed the Plaza to wow the Expo’s visitors and in order to showcase Seville’s talents in industry and crafts.  Only this semi-circular pavilion remains from Expo ’29, the others are now used as museums: the Pabellon de Bellas Artes is now the Archaeological Museum, and the Pabellon Mudejar now houses the Museo de Artes y Costumbres Populares.

For me, the best way to approach the Plaza de España is by horse and carriage.  Touristy, I know, but a ride through Maria Louisa Park to this lavish display of Spanishness, is very Sevillana and highly recommended. Pick a carriage up near the Cathedral, or the bull-ring, and fix your price.  It’s not too expensive (a 75 minute trip around the main sights of the city will only cost you €40 so you could do that and get off at the Plaza España: if there are two or three of you that makes it very reasonable).

And then it will be time for tapas again, a manzanilla or a fino.  Losing my camera didn’t make me stop going to La Casa de las Teresas because the tapas were wonderful, slivers of acorn-fed jamón serrano draped over morsels of bread, little coquinas (clams), skewers of garlicky prawns and pungent tomatoes in a garlicky sauce, washed down with Manzanillo, the delicate wine from  Sanlucar de Barrameda.  I’ll be back.

N.B.  The Plaza de España is situated inside Maria Luisa Park, near the Teatro Lope de Vega and the University.  It is also near the Torre del Oro, embarkation point for trips on the River Guadalquivir (also highly recommended) and the Hop on Hop Off bus.

the other side of Zagreb / Croatia