From bonsai in lush landscaped gardens, to kimona-clad beauties shopping in Ginza, and from pale green tatami mats in Ryokans to exquisite floral arrangements, Tokyo, as well as reaching into the future, is picture-book Japan come to life.

This is the first stop on a tour that will take in stays in some of Japan’s most beautiful cities and countryside, Kamikochi in the Japanese Alps, Kyoto, the ancient capital, Takayama, whose beautiful old town still preserves traditions, Hiroshima and Miyajima, and Hakone where a cable-car side-trip to Mount Fuji is planned.  Fingers crossed, the weather will be fine on the day.

Driving into the city from the airport did not show a green  and pleasant land.  Living space is at a premium in Tokyo, which means that the suburbs are composed of high-rise apartment blocks built wherever space could be found, all in a uniform grey, unbroken by a splash of colour or flowers on a balcony.  Once in the city however, another world becomes apparent.

Tokyo is a city of districts, each offering something different to the visitor, so it repays a bit of research before you set out to explore.

With its sensory bombardment, the capital of Japan can seem daunting to the first time visitor but with a little planning, we found it to be very accessible.

Tokyo is composed of many different districts each with its own character and charm, and as a capital with a reputation for safety, walking the streets is one of the best ways to absorb the atmosphere, check out the local craft shops, or explore the shopping malls both below and above ground.  I am a leisurely traveller, happy to leave some things unseen, rather than rush around ticking off the sights, so I didn’t try to see everything.

Rail is, without doubt, the best way to get around Tokyo, and the trick is to buy an IC Rail Pass for 3,000 Yen which is something like the UK Oyster Card, and which is valid on the vast subway network, the equally extensive overland train network, and the Monorail (great for views over Tokyo Bay), and also valid to use in some Japanese cities.  Not only that, but you can use it to buy drinks from the kiosks on every station, just slap your card on the designated spot, and hey presto! green tea or hot chocolate can be yours in an instant.  Topping up when needed is easy, with instructions in English.

Taxis are on the expensive side, but you don’t tip in Japan so at least what you see on the clock is what you pay.  If you decide to hire one, then ask your hotel to write the destination in Japanese and show this to the driver.  Rear passenger doors are automatically locked so wait for the door to open.

Luckily my travelling companions, Ken and Steve, are wizards when it comes to map-reading, especially subway maps, so I was able to rely on their expertise on negotiating the metro.  Even I, after the first day, felt confident beneath Tokyo’s streets, as the system is made easy for non-Japanese speakers, with letters and numbers as well as names on the stations, fail-proof directions to platforms and tannoy announcements throughout the carriages when a station is reached.

Tip:  Buy your IC Card and get a Tube Map as a priority on your first day.  Then hurl yourself into the city and enjoy the experience – remembering to stop for sustenance occasionally.

Everyone said the Tsukiji fish market which handles a larger volume of seafood than any other market in the world is a must, and although we had all seen fish markets in the East before, we went there on our first morning.  It’s impressive, with over 400 varieties of seafood on display from massive tuna laid out on marble slabs, squid and octopus squirming in baskets, shellfish heaped up in mounds, baskets of crustaceans, and eels, lots of eels, along with species of fish I’d never seen before.  Tiny automated carts zip around (you need to watch out for these) collecting boxed items to be forwarded on.  I loved the machine where huge blocks of ice were man-handled into a drum which turned it into ice cubes which were then used to pack the fish for the retail market.

Too many to be able to visit them all, so we choose just three, the Shinjuku Gyoen Park where an air of tranquillity heals the spirit, and Koi carp plop in the streams under arched bridges, the gardens surrounding the Imperial Palace which are a superb example of the perfect Japanese Garden and the Kiyosumi Gardens with its large pond surrounded by some very special stones placed in the garden as stepping-stones, paving stones and stones for the waterfall. 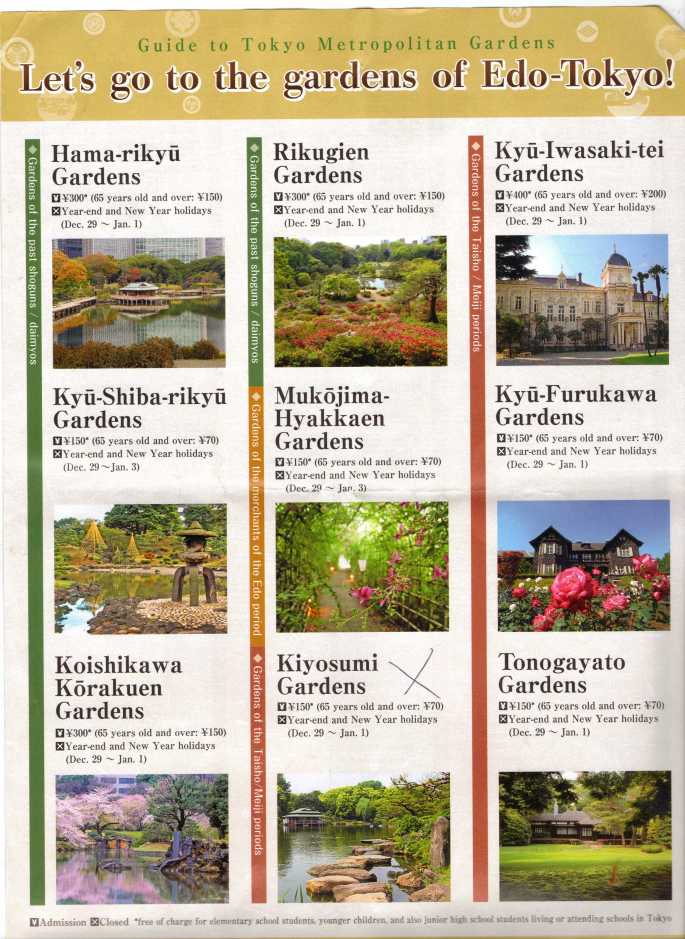 There are too many Museums to mention and too many to visit on a 3-day visit if one wanted to see anything else, so Fukagawa Edo Museum was the only Museum we visited in Tokyo.  This was an instant lesson in Japanese history and was a great help in understanding modern Japan.  It consists of a display of reconstructed Fukugawa Saga-cho houses, taverns, and shops, all looking as though they’ve just been vacated – as well as a small theatre and lecture hall, all furnished in the period.  There are interactive displays and fantastic model towns, rivers and courtyards filled with people.  Well worth the visit.

There are so many superb restaurants in Tokyo, that won’t go into the eating experience, but the best sushi restaurant in Tokyo is said to be in Kyubey, right here in Ginza .  Sadly, we just couldn’t make time to visit it as there was just so much sight-seeing to take in but from what we heard from other people, this is definitely the place to go.  The prices are in keeping with the area with dishes from 4,000 to 8,000 yen, while a full set runs from 10,000 – 30,000 yen.

But I was mightily intrigued by some of the ‘alternative’ restaurants in the city.  First up there are the ‘Maid’ restaurants which pander to Japanese male fantasies and allows the customer to interact with real-life manga characters. Waitresses are typically dressed as French maids and customers are treated as though they are the masters/mistress of the house.  These range from standoffish Victorian style maid service to the school-themed cafes where customers pay to be spoon-fed or to be slapped in the face in public.

An eye-opening blog by fellow WP blogger, Stacey Gleiss, is worth reading here, https://thesixfootbonsai.com/2016/05/22/child-bride-a-few-months-shy/ as it explains a lot about these restaurants and the Japanese man’s liking for ‘childlike women’.

Then there are the ‘Cat’ cafes, the ‘Dog cafes, the ‘Bird’ cafes, the ‘Rabbit’ cafes, where you can sip your coffee or tea while relaxing with either your own pet or a rental pet.  As space is so scarce, many people do not have the option to keep a pet so this is the answer to the problem.  Mind you, if you do have the space to have a dog or a cat, you can also buy a pram in which to wheel them about.  It stopped me in my tracks, but the Japanese sailed serenely by, unfazed by this strangeness.

Dog in Pram, not unusual in Japan

And now there is a ‘Goat’ café as well, 5 minutes walk from Shibuya Station at Shinoda Building 1F, 23-3 Shibuya, but I wasn’t able to check this out to see how they interacted with the goats.  This one sounds seriously weird.

Planning to the Nth

Have Bag, Will Travel
OUR CROSSINGS