Crete is the largest island in Greece, a place of dramatic mountain ranges and gorges dotted with ancient ruins and architecture from the medieval period onwards.  Known as the cradle of civilisation and the birthplace of Zeus, the island provides the backdrop for many of the Greek myths and legends we are familiar with.

Throughout the island are scattered hamlets and villages and high in the dramatic White Mountains not far from Chania, lies the village of Therissos, which has not just one, but two museums.  One would be unusual in a place of this size (pop. just over 100) but to find two is extraordinary.

I visited the village two years ago when I was staying at Malarme on the coast, mainly to visit the Museum dedicated to the Greek resistance in World War II which I had heard about in the course of my studies in war history. 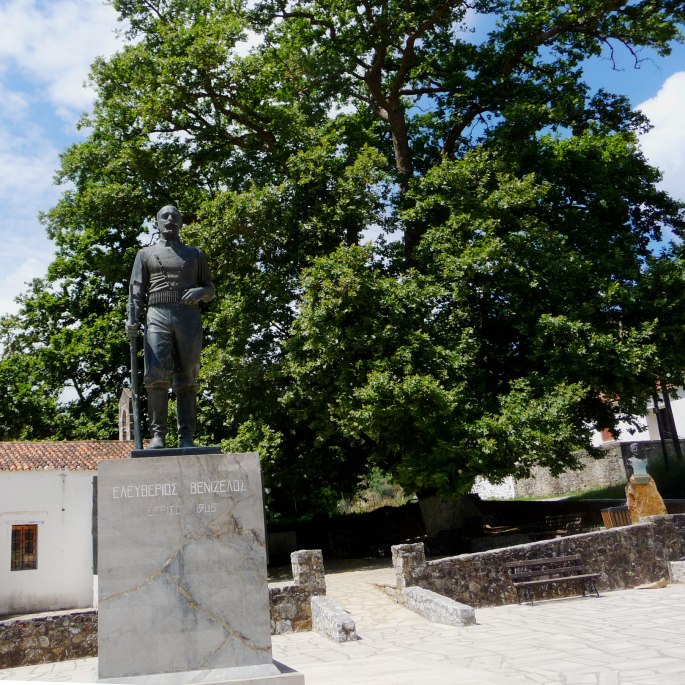 Sadly, my interest in the wars in which my own country had been involved had led me to neglect local Greek history.  I had a lot to learn about the resistance of Therissos over many decades, centuries one might say.

Talking to local people, I soon realized that the important museum for them was the one dedicated to the great Greek patriot and politician, Eleftherios Venizelos who fought for Cretan independence from the Ottoman Empire in 1887, who became the island’s first independent Prime Minister in 1905 and then Prime Minister of Greece in 1910.   Of more importance to the locals, however, was the fact that Venizelos was actively involved in the drafting of the Cretan constitution, that he took part in the armed uprising in 1905 which deposed Prince George, and that he negotiated the unification of Crete with Greece. 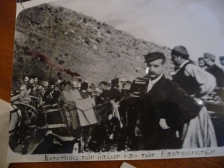 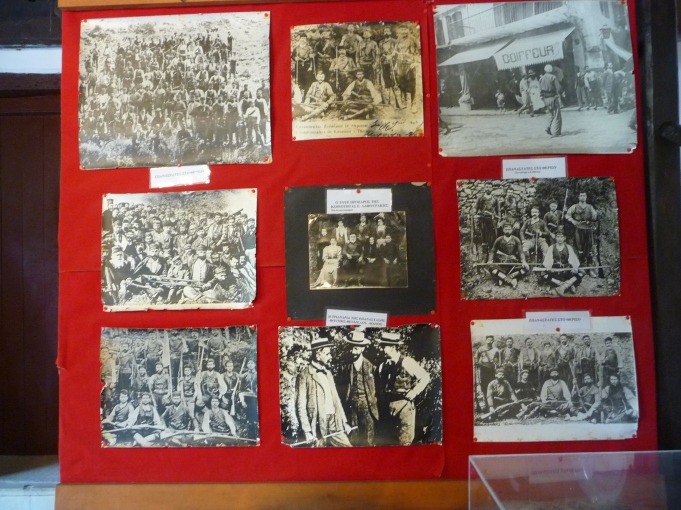 He lived in Therissos and his house is now a museum dedicated to Venizelos and other local people who were involved in the struggles for freedom from the Ottomans.

The other museum, one dedicated to World War ll, is a purpose built modern space with few artefacts but many pictures and letters.  Unfortunately, not many of these are translated but sometimes a volunteer is on hand who can help with this.  Entry is so cheap I felt duty bound to leave a large donation as it is purely self-supporting.  It is very local to the young men who died fighting the Germans in the mountains, a bloody conflict that is known for the savagery on both sides. 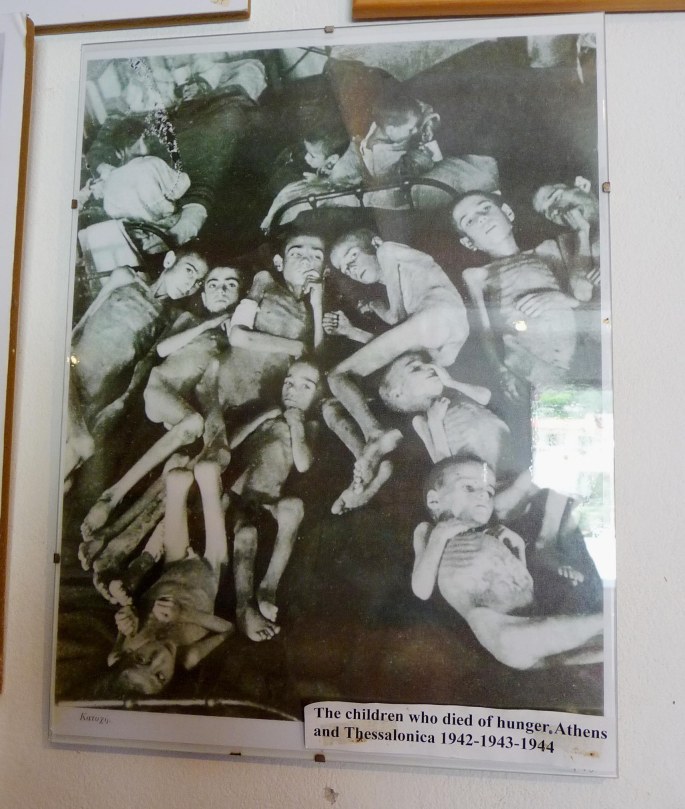 Some of the pictures are harrowing and deal with the war on the mainland as well as the war on Crete, pictures of starving children, scenes from the village of Kandonos which was burned to the ground in retaliation for the killing of 50 Germans, and pictures of the terrible life lived by the villagers during the harsh winters.

The savagery on both sides was legendary, from the locals shooting parachutists out of the sky in cold blood to the occupying forces, shooting whole families and villages on what often seemed a whim. It is difficult to take all this in, surrounded as one is by a landscape of such beauty. 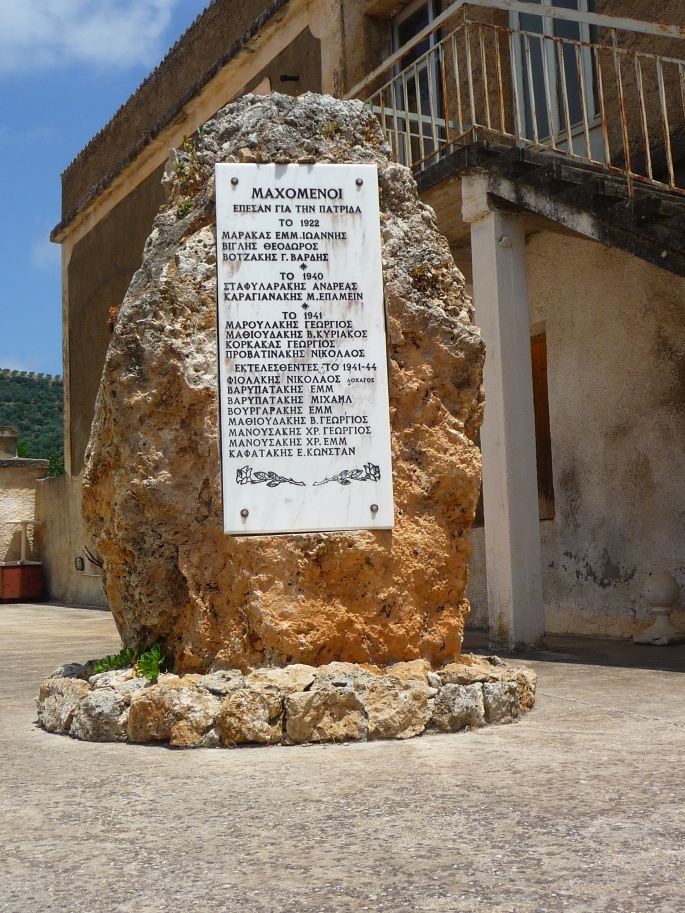 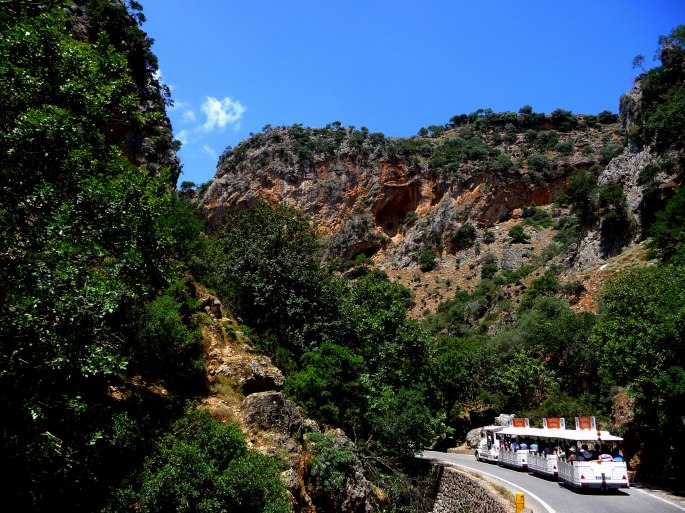 I journeyed up from the coast on the little ‘Dotto’ train with which most of us are familiar in cities and resorts, but in this case, it traversed the famous Therisso Gorge.  It surged up the hill in under an hour, through magnificent scenery, the air heady with the scent of herbs, great swathes of wild thyme, rosemary, pine, marjoram, oregano, and fennel. Many of the olive trees along the side of the road are hundreds of years old and behind the rocky caves can be glimpsed walnut, almond, hazelnut and chestnut trees.

In the village itself, red, white and pink oleander trees bloomed, the scent mingling with the smell of cooking from the little tavernas that were operating, some with open wood fires and all serving delicious Greek salads and fresh fish, alongside local dishes infused with the scent of pine seeds, olive oil and fennel.

The little Dotto train allowed about two or three hours for a visit, long enough to wander around the village, have some lunch and still have to time visit both museums.

I enjoyed the trip so much I went back a second time a few days later and spent more time in the museums, reading the letters with the help of a student and trying to come to grips with what had happened here where the resistance hid out for many years during the second world war, harried and hunted like animals, during bitter winters of extreme cold, and parched summers of unbearable heat.

The photographs tell a tragic tale and I am haunted by them still.

Best books on the history of the Battle of Crete:

Crete:  The Battle and the Resistance by Antony Beevor (John Murray, Paperback – a division of Hodder Headline (1991).  Still regarded as the best history of Crete during WW11

The Cretan Runner by George Psychoundakis (trans. by Patrick Leigh Fermor):  John Murray, Paperback (first published 1955).  A first-hand account by one of the partisans from the mountains.

11 thoughts on “A CRETAN VILLAGE WITH 2 MUSEUMS”