It’s not a walk around Lake Orta, but rather a walk around the small Isola San Giulio (St. Julius’s island) a short boat ride from the town of the same name on the lake.  I have to confess it’s not up there with Jo’s Monday Walk, as it takes no more than ten minutes to walk around the entire island.  That said, I spent forty minutes on the walk as I stopped often to listen to the sounds and to think about the words printed on plaques high up on the walls in phrases like “Listen to the silence” and “The Walls are in your Mind”. 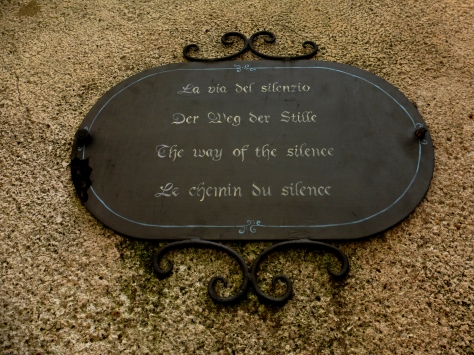 Lake Orta is one of the prettiest lakes in Northern Italy, as far from the touristy Lake Como as it’s possible to be, and San Giulio is possibly the prettiest town on the lake.   It is named after St. Giulio who is credited with expelling snakes and dragons from the island when he arrived in 390 AD (via a raft miraculously made from his cloak) in order that he could build his 100th church there.  The Basilica one sees today is dedicated to him and was built on that same site in the ninth century.

Today as one approaches the island, one sees a cluster of buildings built right at the edge of the water, private residences now but once the homes of priests who lived on the island.  Inside this ring of villas is the basilica and a Benedictine Abbey where 70 nuns dedicate themselves to silent contemplation and prayer.  In a world without words, they go about their work of repairing ecclesiastical garments. 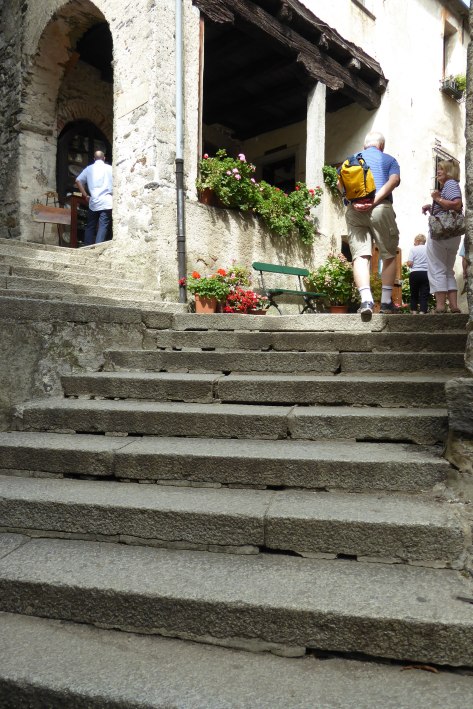 The entrance to the area is through a small arched doorway at the top of a set of stone steps and once through this one is faced with the Romanesque basilica which contains a feast of frescoes and sculpture.

Sometimes called The Way of Silence, other times The Walk of Meditation, it is a cobble-stoned alleyway that circles the island, enclosed by towering grey stone walls topped with green ferny plants that reach for the sky.  From the walls project ornamental signs in four languages, one side of which instructs you to listen out for particular sounds while the other side lays down inspirational advice –  ‘Listen to the water, the wind, your steps’.

My interest was in the walk, however, so I didn’t spend much time in the church but hurried outside to the cool path that curved around the island, shaded by the buildings on one side and the outer wall of the monastery grounds on the other.  There were visitors aplenty on the walk, most observing silence, but there were pockets of noise from one or two groups who didn’t keep to the spirit of the place.  There was no discernible movement behind the windows overlooking the path so no doubt the nuns are used to a certain amount of noise.

I completed the loop in about 20 minutes by meandering rather slowly and absorbing the ambience. There are no benches or seats along the way on which to rest which seems a pity, not because I felt tired, but because I felt it would have added to the experience to be able to sit and meditate for a few minutes in these very special surroundings. 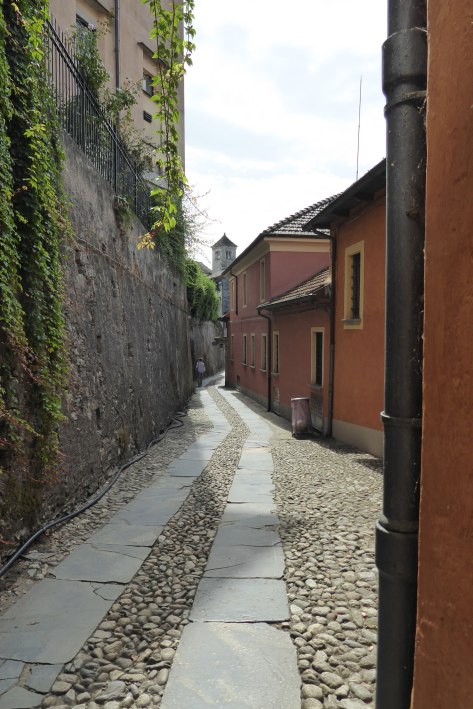 Having reached the end, I turned and walked back along the “Way of Meditation” in order to read the words from the other side of the plaques: then I exited through the arched door to board the boat that would take me back to the town of San Giulio for a much-needed café e gelato! 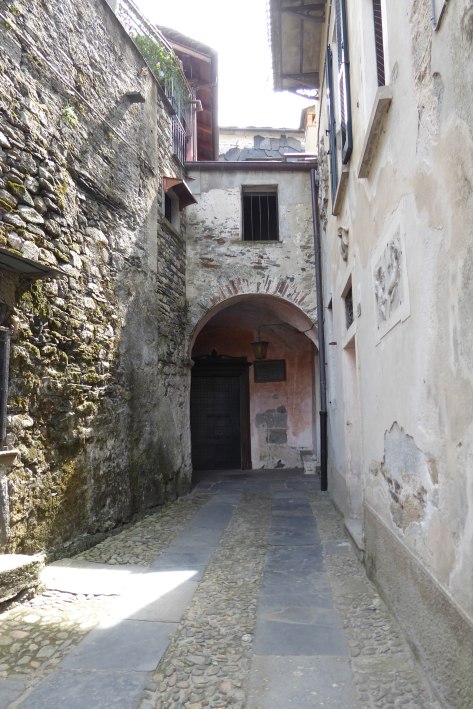 Before I left the island I sat on a boulder overlooking the sea and listened to the silence, a silence only slightly disturbed by the lapping of the waves, the wind sighing in the trees and in the distance, the phut-phut of a motor-boat.  I tried to imagine what it would be like to sit here as dawn broke over the lake and the mist rose from the shoreline opposite.  The nuns sing Matins every day at 4.30 and in my mind I heard the sound of music drifting from the Abbey as day broke, and I promised myself that I would return one day to experience this moment.

There are a few rooms available and the Abbey welcomes visitors seeking a retreat from the world.

The round-trip fare is 5.50 Euros and the boats shuttle across the bay all day. 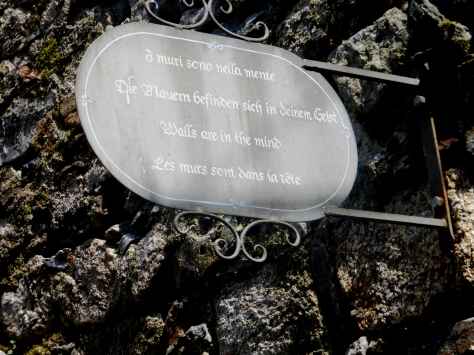