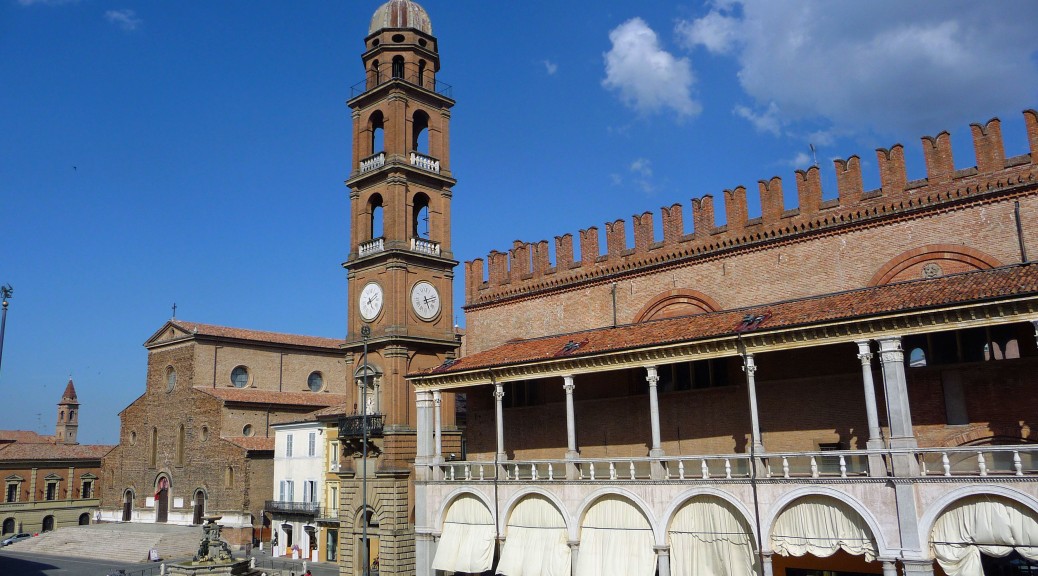 Becky’s lovely Tavira vase post reminded me of the beautiful ceramics we saw a few years ago on a trip to Faenza in Italy, the town between Bologna and Florence which produces work of great originality from old, traditional, designs and occasional new designs.  These ceramics go by different names, depending on who is speaking about them: sometimes they are called Majolica ware, and sometimes they are called Faience, the French word for the ceramic, and the word from which the town derives its name. 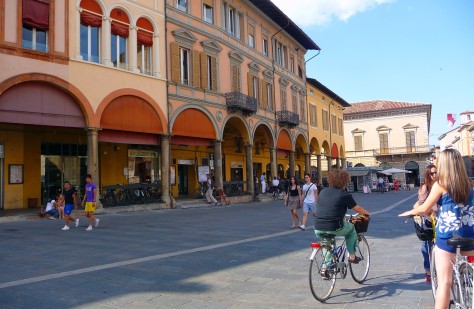 Faenza has been a flourishing city from the 2nd century AD; from the 11th century it started to really expand and grow and by the Renaissance period it had reached its peak, thanks to good relations with nearby Florence, the centre of Italian artistic life.  The city we see today with fine Renaissance architecture and Neo-classical monuments is a testament to this period of prosperity and growth. 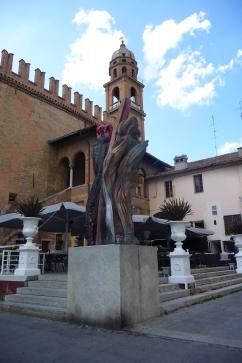 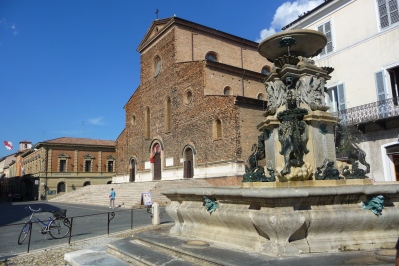 Faenza majolica was born here because the land was rich in the type of clay needed for the production of fine pottery and because the inhabitants were able to mould the clay into beautiful objects.  Over the years the craftsmen absorbed the knowledge flowing from Florence and became experts in shape and line as they perfected the pottery and became artists.

Majolica is terracotta clay, glazed with powder and water which makes the object waterproof and gives it a high gloss surface on which traditional designs are painted.  Sometimes the object is fired twice to give it strength and sometimes it is baked in a plaster cast which is then broken to expose the piece.

The designs are etched on to the glaze, or sometimes the object is covered in paper on which pin-pricks are made, after which black coal-dust is used to stamp the lines through the pin-pricks – a form of stencilling.  Precious metals are also used and this makes the object more expensive, of course, as gold, silver and platinum need 3 firings and to be heated to 750 degrees. 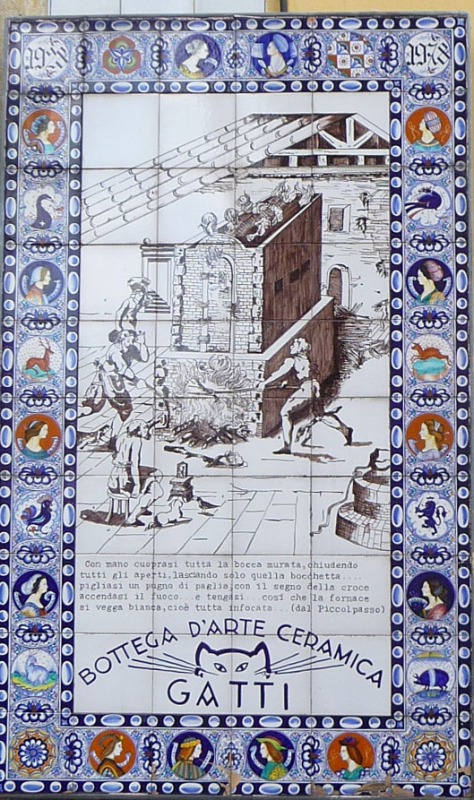 This is the sign for the oldest workshop in Faenza

In September and October international contemporary and classical ceramic art events draw majolica amateurs, collectors and artists to Faenza from all over the world.

The ceramics alone make the trip to Faenza worthwhile and there are over 50 workshops most of which welcome visitors – look for the signs outside the shops (see one above).

However, Faenza is also a town of outstanding artistic and architectural features, two beautiful squares in Renaissance style, elegant arcaded streets, palaces, a 15th-century cathedral and an 18th-century theatre add to the aesthetic enjoyment while the food is superb.

Not to be missed:   The magnificent Museo Internazionale delle Ceramiche in Faenza has some of the world’s most beautiful pieces of majolica from every epoch and from all over the world, including a section dedicated to pottery from the Renaissance period.

A ‘Majolica line’ can be traced from Faenza to the UK, through the centuries right up to the nineteenth when the technique of tin and lead glazing was further developed in London and Brighton before moving to Stoke-on-Trent, Staffordshire.   Herbert Minton’s porcelain factory in Stoke on Trent was already quite famous when, Leon Arnoux, the great French ceramic chemist joined it in 1841 to help regenerate the production of lead-glazed pottery based on Renaissance designs.

These early pieces were destined for English gardens as the lead glaze protected urns, fountains, garden seats and ornaments from the English weather.  Minton then used the same process for their fast-growing trade in culinary dishes, each piece descriptive of the food that would be served on it, oyster plates, fish platters crab, lobster and sardine boxes,  and game dishes showing rabbit, partridge, pheasant and quail.

(I have seen references to the effect that the word Majolica refers to the fact that the goods were first exported to Majorca and then re-imported,  It seems plausible but I haven’t been able to ascertain that this is, in fact, where the word came from).

3 thoughts on “Majolica – Made in Faenza, Italy”