Connections between rooms in castles are well documented, less well known is the connection between the Castel Sant’Angelo in Rome and the Vatican City.

The Castel of Sant’Angelo, the massive fortress-like building on the right-hand side of the Tiber, was originally built by the Emperor Hadrian (117-13 AD), as a monumental tomb for himself and his successors, not far from the Mausoleum of Augustus near the edge of the Vatican fields.

By the 5th Century, the Mausoleum had been included in the defensive system of the city walls, and from the 10th century onwards it had become a fortress, the Castel Sant’Angelo, its purpose being to defend the Vatican, to which it was linked by a special passageway (the Connect).  Originally the Mausoleum was surmounted by a gilt bronze statue of the emperor in a chariot.

Below is a photograph taken from the cupola of St.Peter’s at the Vatican and the Castell is quite some way from it, on the left-hand side just beyond the patch of dark green trees that can be seen.

Looking Down from the Cupula of St. Peter’s in the Vatican, towards the Castel S Angelo.  Photograph Copyright Solange Hando.

The Mausoleum was incomplete when Hadrian died but he was buried there one year later in 139 AD.  The bridge connecting both sides of the Tiber had been built by Hadrian to facilitate direct access to the tomb, a more elaborate bridge than any other Roman bridge at that time: it survived until the end of the last century by which time it had become known as the Ponte Sant’Angelo. The two end spans were rebuilt at the end of the last century and only the three central arches are originals from the period 130-134. 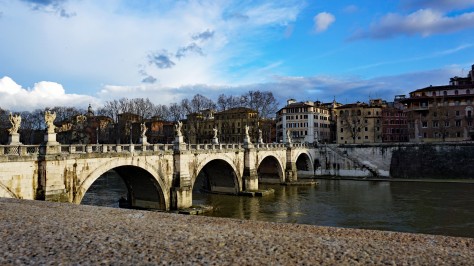